By Adamu Haladu from Yola 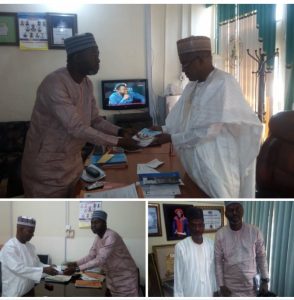 The Chartered Institute of Public Diplomacy and Management commended the management of Federal Medical Centre, Yola for the giant stride; the well celebrated breakthroughs, having carried out some of the most complicated surgeries, successfully too, having gained partial approval for the facility upgrade to a teaching hospital with about five clinical departments currently running postgraduate trainings, in addition to postgraduate perioperative nursing training and for the effective and efficient management and administration with integrity, accountability end in all inclusivity with diplomacy.

Mr. Stephen Odukoya the Director of the Institute noted, Friday during courtesy call on the management of FMC Yola, the health facility has five respected fellows with dedicated responsibilities, among other respective categories of membership of the Institute.

Stephen said that Adamawa state alone has about sixty fellow members out of 14,000 members of the Institute cut across 20 states of the federation.

“The five outstanding Fellows of the Institute who are members of staff of FMC Yola are: Alhaji Aliyu Muhammad Nayejo the Director Administration, Adamu Muhammad Dodo the head of information and media relations, Alhaji Aliyu Dauda Belel the head of procurement. Alhaji Mohammed Baba Daniya and Princess Asmau Aliyu Musdafa senior officers with the departments of finance and administration respectively.”

CIPDM further congratulated the Medical Director FMC Yola Prof. Auwal Muhammad Abubakar for being elected president of the Paediatric Surgeon of Nigeria and for having the highest votes during election into the Council membership of the West African College of Surgeons.

“Based on your effective and efficient servant-leadership; management and administration, based on your outstanding contribution to clinical governance and practice, the governing council of the Chartered Institute of Public Diplomacy and Management, has resolved to confer the Honorary Fellow membership on you, to be duly formalised during the Institute’s induction ceremony slated for April 12, 2019 here in Yola, Adamawa state,” Stephen said.

Responding, having thanked the Governing Council of the Institute for the visit and the honorary fellow membership to be conferred on him, Prof. Auwal commended the Institute for having five outstanding fellow members as members of staff staff of FMC, who’s diligence and dedication to assigned responsibilities professionally, contributed immensely, to the success story of the health facility.

Prof. Auwal expressed the willingness of the management of the health facility to collaborate with the Institute in the area of capacity development to enshrine the spirit of teamwork in workplace and to ensure professionalism, efficient and effective leadership management and administration with diplomacy in service delivery.