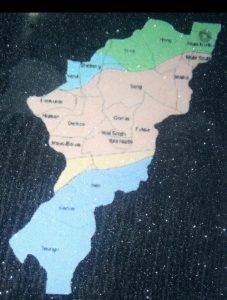 Boko haram insurgents have killed two people and burnt foodstuff and other valuables worth over one hundred million naira after ransacking Kirchinga village in Madagali local government area of Adamawa state, Northeast of Nigeria.

The Kirchinga, which bordered Sambisa Forest den of Boko Haram, was severally attacked since the insurgents started launching attacks on communities in the Northeast ten years ago.

The latest attack on one of the villages of the local government where the PDP gubernatorial candidate in Adamawa state Rt. Hon. Umaru Ahmadu Fintiri hails from, came barely less than two weeks when eligible voters in Nigeria will go to the polls to elect President and Parliamentarians.

According to leader of Hunters Association in the area Mallam Adamu Sarkin Baka, the insurgents came in large numbers with heavy artillery ransacking more than thirty shops where foodstuff and other valuables were kept before setting them ablaze.

“From all indications, election may not take place in the area because of the fear people have,” Adamu explained.

Adamu said that the insurgents operated for more than three hours without any resistance as hunters in the area could not confront them because they were armed wit heavy artillery;

Adamu however, said that the military arrived at the village barely after the insurgents committed the heinous act and left.

“Some people have fled the village based on rumours that the insurgents may come back.

“We that have not flee are now living in fear, due to inadequate security,” Adamu lamented.

Reports from the area indicate that the situation is now calm with the presence of heavy military on patrol.