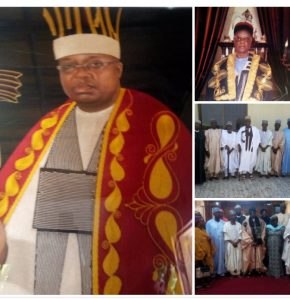 Members of the Hospital
Paupers Fund Yola, led by
Alh. Suleiman Abdulahi the chairman, have extended their advocacy and fund raising to Numan federation.

The first point of call, for such visit, is the traditional rulers, for blessing and passing of information to the subjects. The members were warmly received at Hamma Bata and Hamma Bachama palaces in Demsa and Numan local government areas of Adamawa state Nigeria.

In his opening address, Alh.Suleiman Abdullahi, said that the members have earlier paid a courtesy call on HRH Lamido Adamawa Muhammad Barkindo Aliyu Musdafa, Ph.D. CFR. Premier Ruler of Adamawa, Chancellor University of Owerri, International Grand Patron of Tabbital Pulaaku.
They saw it worthy to take the advocacy to the Emirs and chiefs, in the sense that they were the leaders, people heavely relied on.

As the name implies, Hospital Paupers Fund, is purposely established to raise funds that would be used to carter for indigent patients who could not afford to pay for the healthcare delivery services rendered to them.

Abdullahi explained that the Federal Medical Centre, Yola (FMCY) has been receiving an abnormally high number of patients who got admitted but were unable to pay for the healthcare services rendered to them. This could not be unconnected with the economic situation of the area arising from the devastation and displacement occasioned by Boko Haram insurgency.

The health facility, has traditionally been exempting such patients from paying for the healthcare services rendered to them, but the upsurge in the number of those requiring such exemption was soaring, in the face of dwindling financial resources of the hospital. This has made the management to look into the matter with a view to finding sustainable solution. This led to the creation of a Hospital Paupers Fund Yola.

Established in October 2015, the fund scheme members were drawn from retired civil servants with excellent records of integrity during their service carriers, complemented by some senior members of staff of the Federal Medical Centre, Yola.

“The fund scheme is charged with the responsibility to:

1 Establish a purposeful Paupers Fund in Hospital in order to assist indigent or less privileged patients who are on admission and cannot afford their bill.

2 Carry out necessary contacts with influential persons, governmental and non-governmental bodies towards generating funds for the Paupers Fund Account.

3 Advise on how to operate a viable Paupers Fund Account in FMC Yola.

4 Determine utilisation of funds from the Paupers Fund Account with regards to Hospital bills for exemption of Road Traffic Accident (RTA) Victims who cannot pay their bills.

5 Advice the hospital from time to time on ways and means of engendering harmonious hospital/community relations.

6 perform any other duties that may lead to successful operations of the Paupers Fund in the hospital,” Abdullahi said.

Abdullahi explained further that so far, over 500 patients from minor treatment to major remedy, including surgeries, have benefitted from the fund scheme, with the least on the list being N2.200 and the highest being N70.000.

The fund secretariat is located at the Federal Medical Centre Yola, Adamawa State. It operates the following bank account:

Responding, the Hamma Bata Chief Alhamdu Gladson Teneke and Hamma Bachama Chief Honest Irimiya Stephen, have separately, commended the activities of the fund scheme, assuring that they would mobilise their council members and members of the communities to join the popular call in donating generously for the sake of humanity.

The Periscope Global Investigate, will report that sometime in 2017, HRH the Lamido Adamawa has donated the sum of N3.5m while his council members who were present during the courtesy call, have donated the sum of N930.000 making the total sum of N4, 430, 000.
The breakdown is as follows:

There were earlier donations by well meaning individuals who will not want their names mentioned.

The management of the Federal Medical Centre Yola, equally contributes to the fund scheme in addition to the faith based organisations within the hospital:

HE. the former vice president the Waziri Adamawa Alh. Atiku Abubakar, earlier in 2016 donated the sum of N10m, which was then the highest contribution.

Having been impressed with the way the fund was managed, the Wazir of Adamawa has in 2018, made additional donation of N10m, making the total sum of N20m to his credit for charity and will still be counting.

The OPEC Secretary General Sanusi Barkindo, was said to be at the Federal Medical Centre, Yola sometime last year, simply to personally assess the diagnostic facility with a view to determining the areas of intervention.

Barkindo was said to have got wind of the activities of the hospital paupers fund. Therefore, he was said to have facilitated the intervention with N15m being donated by a firm as a corporate social responsibility.

For establishing the hospital paupers fund and the impact it has on the community as a social responsibility, Professor Auwal Muhammad Abubakar the Medical Director FMC Yola was, last year, nominated by the Hon. Minister for Health Prof. Isaak Adewale for a special recognition award, powered by Nigerian Healthcare Excellence Award at its fifth anniversary, held in Lagos. The Periscope Global Publishers was registered to cover the events.

There was a similaraward, in addition to the successful sepation of conjoined twins, powered by the Future assured; Aishatu Buhari’s NGO.

Donation is open to everybody. No amount is meagre for a charity. You can’t quantify the blessings.