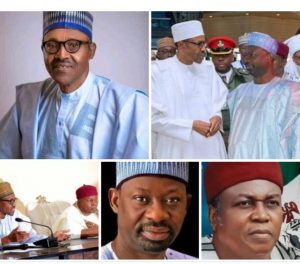 Migrating from the experiences of the previous electioneering atmospheres that were summarily assessed to be marred by unhealthy rivalry, which resulted in denying befitting venues to the leading opposition political party, by state governors, to hold either gubernatorial or presidential mega campaign, governor Darius Ishaku of Taraba state, in tune with the Jewel in the Savannah; the hospitality being introduced by governor Ibrahim Hassan Dankwabo, welcomed President Muhammadu Buhari for the APC presidential campaign, held at the desired venue.

Social commentators defined this as a political maturity; setting the scene, befitting of politics without bitterness.

“Gombe and Taraba are two out of the six states in the northeast Nigeria, led by PDP governors. One would have thought that the governors in the two states, more especially, Darius of Taraba, would work on frustrating the APC presidential campaign or at least work out on the president by leaving the state completely avoiding the presence of the president. However, the governors have shown maturity.

“Yes! The idea that it’s because of the ruling party majority factor, will be accommodated. This can only however, be related to Taraba, a state that is still battling with, fails to come out of its antiquity of crudest ethnicity, married to religious sentiment in spite of the beauty in its diversity to have been wealthy in harmony and mutual coexistence against any form of antagonism bred by unsavoury savagery, nurtures only in a Godless society that was used to be visualised only from the shadow, until recently, when it becomes apparent with the marginalisation of the faithful, professing a faith indifferent from that of the state governor.

“It could be recalled that President Muhammadu Buhari, in spite of the fact that he was an opposition party presidential candidate during the 2015 electioneering atmosphere, was accorded what could be described as hospitable reception in Gombe the jewel in the Savannah by Governor Hassan Dankwambo.

This has indeed boosted the popularity of the latter such that even when PDP was perceived as a party that mortgaged the Northeast to the insurgency, though his amazing performances, made a Zuma Rock factor, the electorates of the Jewel in the Savannah, would not resist mandating their amiable achiever for a second tenure,” I once, articulated.

Having appreciated the Darius reception, not dangerous deception with the campaign journey to Jalingo, the teeming electorates in Taraba state, represented by the former acting governor Sani Abubakar Danladi the APC gubernatorial aspirant, having commended President Muhammadu Buhari for actualising the dream of Mambila hydro power among other projects, would want the federal government to provide adequate security to ensure rigging-free election with a view to avoiding any fever out of fear of whether or not it would be free and fair election in the state.

This, the electorates conceived, would take care of the possibility of atrocity resulting from being overambitious, typical of that whispered to Macbeth, conspired by the witches in the form; “Fair is foul and foul is fair/ Hover through the fog and filthy air. (See William Shakespeare’s “Macbeth”).

Having been impressed, though they belonged to different political parties, President Muhammadu Buhari duly commended governor Dankwambo for what could be described as dividends of democracy in Gombe.

Recall that sometimes in December 2018, President Muhammadu Buhari was reported to have surprised governor Dankwambo not simply by congratulating him over, but also by sending a representative from among his cabinet members to witness the wedding of governor Dankwambo’s son Khalifa with his wife Anisa Ali.

These among other instances, were said to be nailing the insinuation across the northeast that President Muhammadu Buhari would have wished governor Dankwambo to be in APC for proving to be an outstanding performer.

Recall that governor Dankwambo was the Periscope Global Publishers 2016 and 2017 northeast best governor of the year. He is also being nominated for the 2018 the Periscope productivity award, slated for April 2019, when hopefully, he would have been sincerely sworn in as a senator.

Benue, Plateau and other PDP states in the south also received Buhari. Atiku enjoyed the reception in APC states as well

2019 Election: A Trip Inside The Northeast – The Ruling & The Opposition Parties, Candidates