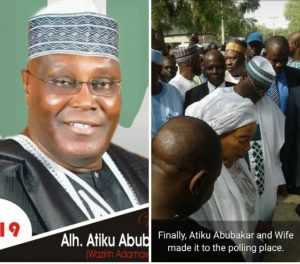 The electioneering atmosphere was calm, cameras were set Saturday, as much as the newsmen who arrived early at the Polling Unit 012, opposite former commissioner of police house, presently, one of the governor Bindow acquired houses, Ajiya 02, Gwadabawa ward, Old GRA, Yola north local government area of Adamawa state.

The atmosphere was simply waiting for the arrival of the PDP presidential aspirant the former vice president Atiku Abubakar the Wazir of Adamawa.

Atiku’s arrival with his wife an entourage, has fantastically reduced the atmosphere to a seeming rowdy but not riotous situation.

Noting the generosity of the Wazir of Adamawa, praised singers would not bother to disenfranchise themselves should they have engagement with the person they considered as “Qaruna” of their time, owing to his stupendous wealth.

Breaking the low relating to campaign at the polling unit during election, with the arrival of Atiku Abubakar, would simply have to be tolerated, when some praise singers, started chanting “Nigeria!” Some of the electorates were heard responding “sai Atiku, some of the electorates echoed “sai Buhari, while the silent elites, were patiently waiting in queue to give frantic response to the choice between the Buhari and the Atiku, with an exercised franchise.

Having exercised his franchise, it was time for the PDP presidential candidate to respond to the press.

Alh. Atiku Abubakar would be impressed with the peaceful conduct of election to give credible outcome.

The Waziri of Adamawa was defined by newsmen as a true democrat when though, he nursed the hope for victory, revealed that he would concede defeat faithfully to destiny for peace and prosperity of the country should he fail to win the election.

The just concluded election at Ajiya Polling Unit 02 in Gwadabawa Ward Jimeta Yola where Atiku Abubakar cast his vote revealed that Atiku lost to Buhari. out of a total 365 votes available:
APC. 186
PDP. 167