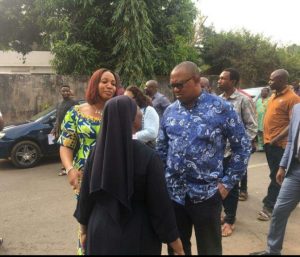 The Vice Presidential candidate of the Peoples Democratic Party (PDP), Mr. Peter Obi, has described the election process as clumsy and imperfect.

Obi who cast his ballot alongside his wife at his hometown in Anambra State, about 9am, also confirmed the arrest of some PDP leaders in the state last night.

Obi who took about 20 minutes to go through the process of voting described the process as slow and a little bit confusing.

“The process is a bit clumsy. You were all here and you could see how long it took us to go through the process. It is too early to comment on the entire process but we expect the process to be more perfect,” he observed.

Obi could also be seen on television complaining about the positioning of the ballot boxes and insisting on their being repositioned before dropping his ballots in the respective boxes.

The former Anambra State governor also appeared to have complained about the ink drying up quickly, as he repeatedly requested for the ink pad while thumbprinting his ballots.

While comfirming the arrest of the unnamed PDP leaders, Obi said they were all together at the time it happened so he could confirm the development 100 percent.

On whether the arrest could adversely affect the chances of his party in the election, Obi said the development portend trouble for Nigeria and not the PDP.

“I just told you yes. Categorical yes. We were all together so I could confirm to you 100 percent. This portends trouble for Nigeria, not the PDP,” Obi said.