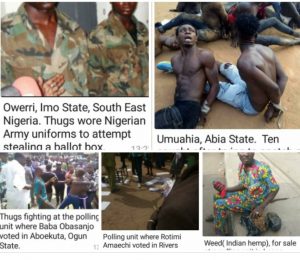 A challenge to security, The Periscope Global reporting politics observed.

“Where’s the executive order?” the disenfranchised electorates seemed to be asking

Owerri was not without it’s woe bearing in mind also that thugs would want to polling units in Abia to a bear parlour or riotous inn as in rivers. Lagos wasn’t lagging behind though there was no thought as thugs were not taught to using the lagoons

I’ll congratulate myself, I’m going to be the winner – Buhari tells journalist