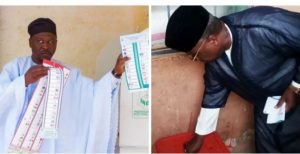 Governor Muhammadu Umar Jibrilla Bindow of Adamawa who exercised his franchise at polling unit 001, Abu Muwachi of Kolere ward of Mubi North LGA Adamawa state said that victory for the All Progressive Congress (APC) in Mubi and beyond was inevitable.

Bindow said the only way Adamawa could express their appreciation to God for having Buhari to restore peace by tackling insurgency in the northeast, was to give the president a second chance to continue with the good work.

Bindow is APC gubernatorial candidate currently battling with the alleged case of certificate forgery and the interference in the affairs of monarchy in the northern senatorial zone of the state.

it was fantastic, Fintiri told newsmen. He felt cool good for casting his votes and for his supporters deciding the leadership of their choice.

Fintiri said that their leader would emerge victorious Insha Allah.

The Periscope Global reporting politics will reveal that the election was without hitches in the northern zone. Though the allegations of vote buying were not ruled out