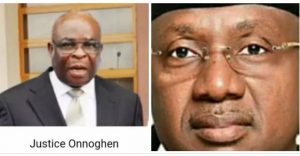 The Adamawa state governor and gubernatorial candidate of the All Progressives Congress (APC), Mohammed Umar Jibirilla Bindow, is in a rut.

Bindow is a tunnel he burrowed himself without anybody’s assistance. He had gored countless oxen that some of them have come back to haunt (hunt) him in his hour of need. This election season, when Bindowo is seeking for return to Government House, Yola, is turning out to be a very uncomfortable period for him, irrespective of what “face” is shown to the public.

Nobody in his position will sleep with both eyes closed.

Part of the problems Bindow is facing at this crucial time, is a court case instituted by a Civil Society Organisation (CSO) challenging his qualification to contest for the office of governor of Adamawa state.

Now this “unknown” CSO is about to unravel Bindow’s political trajectory.

With the submission by the West African Examination Council (WAEC) that the examination body did not issue the certificate used by Bindow in his entire previous contests, the saga has taken a dangerous dimension for the governor.

If I am to be Bindow’s associate in whatever form or manner (which, fortunately I am not), I will advise him to take a dishonourable bow from public life.

Bindow shouldn’t worry because he will be in an illustrious company such as the suspended Chief Justice of Nigeria (CJN) Walter N. Onnoghen. In an irony of fate, Onnoghen’s constituency is saddled with the responsibility of deciding Bindow’s destiny.

I won’t say much, less I anger my lords.

The people of Adamawa, voted for Bindow in 2015 with the mistaken belief that he was a non-sectarian, vastly travelled, urbane and honest.

What they got, is a completely different package that they did not bargain for, which they only got to know as things began to unravel and the cookie crumbles.

It seems as if a deliberate malice had reversed in our selection of Bindow over and above his fellow contestants in 2015.

Instead of being pro-people by being honest and truthful at all times with the electorate, we got a governor who takes pleasure in deceiving his supporters.

Instead of a leader with a soaring reputation, who our society ought to look up to, we got an egoistic, grandiloquent governor.

Deceit becomes the unwritten code of governance in Adamawa state.

It is interesting to speculate on why men wilfully deceive like Bindowo or knowingly break the law like Onnoghen.

It is equally interesting to speculate on why such species of the homo sapiens debase themselves without thinking they are hurting others.

Have you noticed how righteous they sound when they are caught out?

The thought that Onnoghen’s judiciary will determine Bindow’s political destiny and by implication that of almost four million people, leaves me with goose bumps.

Ordinarily, I wouldn’t dare say much on this matter since it is subjudice but the knowledge that the chief priest himself, with the active connivance of senior lawyers have taken his case to the market court, emboldens me.

Lest I be misunderstood, I have tremendous respect for the institution, which shouldn’t be confused with the operators.

We will wait to see how the case pans out.

Bindow and Onnoghen are mortally, morally wounded and may never recover. The two may hardly ever earn any respect anywhere in a civilized society.

This is not about politics; this is reality.

We have to start inculcating in our kids the virtues of morality, honesty, decency and being law abiding.

Bindow has scammed his way into the Senate and the Adamawa state government house using a qualification he never had.

His cup just got filled. It will only be morally right for him to withdraw from public life.

The first Speaker of the House of Representatives in this dispensation, Salisu Buhari, who got caught in similar circumstances, was humiliated out of office after a very rancorous public hanging.

Re-electing such a person will inadvertently be glorifying mediocrity.

I do not like writing obituaries but I hope this will not be Bindow’s political epitaph.

I will still like to see him around. At least he is a zany dresser.