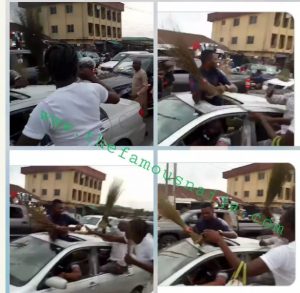 Some APC Supporters are already celebrating as the Presidential and National Assembly results are being announced.

Twitter user, @realme_50 shared the video of APC supporters storming the roads in Ughelli, Delta State along the East West road, celebrating with their brooms.

Unlike in the past, APC tried in Delta State, Buhari seems to have done better in Delta than in 2015, Omo Agege of APC also won senatorial seat, beating PDP candidate, and of course nationally, Buhari is leading Atiku with massive difference. No wonder they are already celebrating on a major road.