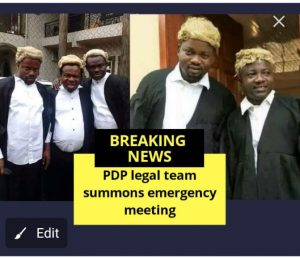 Atiku Abubakar will not concede the presidential election to President Muhammadu Buhari as the Peoples Democratic Party (PDP) has assembled a team of lawyers to challenge the result in court, TheCable understands.

Buhari, candidate of the All Progressives Congress (APC), is projected to win the election with the results declared by the Independent National Electoral Commission (INEC).

PDP sources told TheCable that Kanu Agabi, former attorney-general of the federation, is leading the team of lawyers that will challenge the result at presidential election petitions tribunal of the federal court of appeal, Abuja.

Other members of the legal team, TheCable can report, are Joe Gadzama, who has always served as a lawyer to the party, and Chris Uche, among other senior advocates of Nigeria.

“We are currently collating evidence to challenge the results being announced by INEC. We have been asking them to give us the date of the card readers used in Borno, Yobe and Nasarawa states but they have so far refused. This is daylight robbery,” a PDP executive told TheCable.

“I can also tell you that Atiku will not make any call to Buhari to concede the election.”

The legal team was inaugurated by Bukola Saraki, the director-general of the PDP presidential campaign, on Tuesday evening at the Legacy House, Abuja.

TheCable had reported on Monday that the legal team had summoned an emergency meeting to review complaints about the presidential election and decide on the way forward. 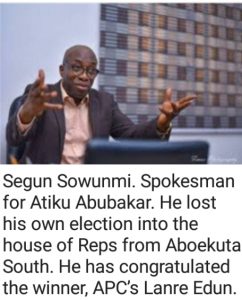 Atiku could not attend meeting as he was observing “bed rest”, according to source in the know.