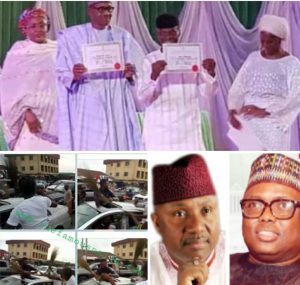 The jubilation is not without apprehension and floodgate of expectations Is not also without reactions of the ought to have been a victory in the state than the lost.

While some people say President Muhammadu Buhari won the presidential election to succeed himself in continuity of the advocated change to the next level.

While some people say APC as a party won presidential election for packaging a credible candidate for a continuity in the charge to the next level.

While the electorates who either voted for President Muhammadu Buhari or the APC and/or both, are celebrating over the victory of their candidate in the continuity of the change for which they are being persuaded to the next level.

The international electoral observer groups have however jointly credited the victory to the entire citizens of the country – supported by effective security, led by the military that resisted intimidation for a showdown with the thugs – in their free, fair and peaceful hence, credible quest for the continued change to the next level.

Though Adamawa a APC led state, lost the presidential mandate to PDP candidate who is an indigene of, the state government is perceived to be celebrating the victory for the party and the president because the winning votes margin between brother-in-laws isn’t any impressive.

Governor Bindow, with most of his key cabinet, who queried the anti party sabotage by some APC stakeholders, chiefly to have him discredited by the president and the party, equally won his polling unit.

However, the jubilation for the victory is in apprehension. Intimidated by the Modinated mode of rally in Yola, which makes another mood of the APC moment.

The judgement on certificate forgery case filed against Bindow, slated for Friday, March 1st, 2019, being tomorrow, has been, however unprofessionally and informally, tried by the court of public opinion with each side in the argumentation playing the lawyer to the law.

One school of thought articulated how the case would be squashed for lacking any merit to usher in respectfully, Bindow by the door.

The other school of thought analysed how Bindow would be thrown out of the window, by the law, for being so low to have passed through it, when he should have passed using the door.

The Periscope critical thinking corner, considered both opinions for a deconstruction.

If the case in question is squashed tomorrow, Bindow would have the window opened opportunity for a gubernatorial race as APC candidate to Dougirei hill.

The question that will remain to be asked is, would the aggrieved elites as APC injured stakeholders, join Bindow for a victory at the poll, bearing in mind that already, APC as a party, has lost the northern and southern senatorial zones of the state to PDP, owing in part, to the alleged anti party?

The civil servants in the state are already apprehensive of another salary humiliating Bindow led government that is considered with humility as simply “to let”.

“You see, till this day, workers salaries in the state, are not paid. We learnt that the delay is politically motivated. The intention is not to pay till close to election day so that people will have money to be able to forget having not been paid. It’s a political strategy that is affecting our domestic needs as civil servants in the state,” one of the government workers whose identity he would rather want remain anonymous, annoyingly revealed.

How persuasive, in the non consideration of the persuasive communication experts to dialyze the poisonous venom spit by propaganda; with the total exclusion of public relations team of professionals that will strategically package and market a governor whose some of the achievements are being made a subject of condemnation much more than commendation; and a jaundiced or mean media mediation experts that will be reinterpreting critical rather unpopular utterances of the governor, to control what is shared by the seeming governor sponsored rather juvenile social media handlers?

The question of dethroning the Emir, the king, should his emirate, perhaps chiefdom, fails to dance to the voting tune dictated by the governor, is equally given for a consideration.

A tough gubernatorial contest, tested by the presidential and national assembly elections.

On the other hand, is the possibility or otherwise of Dr. Mahmud Halilu Ahmad Modi to be passed the APC baton for the governorship race, in the event the judgement goes against governor Bindow.

Will Dr. Modi deliver within two weeks campaign, even while he is hit by the malicious in their campaign of calumny that he is a superimposed candidate from the presidency, added up to the allegation that he contributed to the defeat of APC in the presidential and national assembly elections in Adamawa state?

Therefore, protest vote will not be ruled out. Bindow with his supporters may equally change a nest to work against APC and Modi.

However, permutation could change overnight, overtaken by the idea that the ruling party candidate should be favoured for additional benefits to the state. It is projected that Modi could make impressive outing, especially, when he deploys the services of public relations professionals and media mediation experts.

APC may not have a candidate for the governorship election in Adamawa state should the judgement goes against Bindow and that leaves PDP, APC and SDP as major contenders.

What will be the fate of Adamawa government, should the judgement eventually, passed against the governor? Will Bindow be directed to hand over to Babale his deputy?

“There could be a stay of execution with the right of appeal that could give room for Bindow to remain in power and possibly contest election,” Phillip a critical thinker in Abuja, will point out while opening up to opinion.