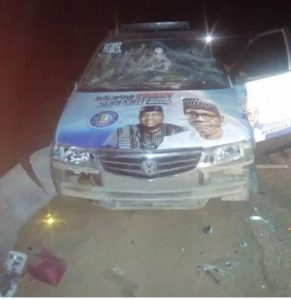 It was reported that criminal gangs carrying dangerous weapons accosted the convoy of the lawmaker on arrival at Mubol and immediately launched ferocious attack leading many, including the lawmaker to sustain varying degree of injuries.

Several vehicles in the campaign train were destroyed during the attack.

Confirming the incident, the lawmaker expressed shock about how a community he helped with a block of classroom could degenerate into such savagery and barbarity, adding that even if he did nothing for the community, he has the personal liberty to freely campaign without harassment or intimidation.

‘’I started my campaign yesterday with locations in the hinterland and finished around 5.00pm. But surprisingly on my way back to my destination, at Mubol village, our convoy was blocked as men and women of the village came out to attack us.

’’During the initial attack, about five cars were destroyed making us to beat a retreat yet the attack did not stop. We put calls to soldiers who came to our rescue, and escorted us but we were yet attacked again despite the presence of the soldiers. My car was directly attacked making me to believe that it was attempt on my life. During the second attack, about ten cars were destroyed.

‘’ For two hours we were held to ransom by the people of the village yet no religious, traditional or any community leader came to our rescue,’’ Barguma said.

The lawmaker called on the governor as well as the elders to intervene so that it would not be degenerated into communal clash between the two communities.

The barbarity against, to bar Barguma is defined as political retrogression