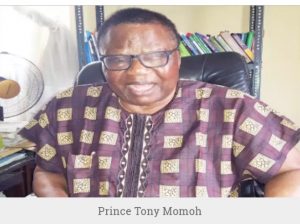 Prince Tony Momoh, is a national leader of the ruling All Progressives Congress (APC ) and former Minister of Information. In this interview with TEMIDAYO AKINSUYI, he speaks on the mood of Nigerians following President Muhammadu Buhari’s reelection and other issues. Excerpts:

President Buhari has won reelection for a second term but many people believe that the euphoria is not there as many Nigerians are not celebrating like they did when he won in 2015? Are you also aware of that?

“Whoever said that must have a problem with his memory because the euphoria now is massive compared to how it was in 2015. I have never seen so much celebration in the history of Nigeria elections and I have witnessed a lot of them. Everywhere in Nigeria right now, people are celebrating. How can anybody say the euphoria now is low when compared to how it was in 2015? In any case, we have a state by state scenario when you have events being acted out. We have never had so much spread by opposition in the history of Nigeria. Buhari won in all the traditional areas. He won in the North-West; he won in the North- East, I think he won in the North-Central. In 35 states of Nigeria, he has 25 percent. He also has more than 25 percent in Abuja. The difference between his total votes and Atiku’s votes is almost 4 million. So, how can there be better result or spread than we have now? In 2011, in the whole of the South-South and South- East, he did not have up to 10 percent except in Edo state. He didn’t even have up to 25 percent in Edo state. In 2015, he had 46 percent in Edo state. He did not have up to 10 percent in all the states of the South- South and the South- East in 2015. Now, he had 25 percent in all the states of the federation in Nigeria, including the FCT. So, why won’t there be much celebrations? Those saying Nigerians are not celebrating his victory like they did in 2015 are not saying the truth.”

What are your expectations from him during his second term; which areas do you want him to give priority?

“A lot of people don’t want Buhari to return for second term because of his strategy. There are lots of things he is waiting to do if reelected. He will attend more vigorously to the fight against corruption. In fact, Buhari follows principle and due process religiously. Nobody is too close to him not to deal with if the person misbehaves or derails, especially when you want to have shortcuts to things you are not entitled to. When I was the National Chairman of Congress for Progressives Change (CPC), someone offered us vehicles for campaign and said ‘If you win, what will you do for me?’ Excitedly, I went to meet Buhari for him to endorse it. But he said ‘Sorry Mr. Chairman, I cannot give out what doesn’t belong to me’. The man who promised us the vehicles then took it away. That is Buhari for you. Here is a man who refuses to take his full salary because he said he is being fed in Aso Rock. Look at the benefits or pensions they give to former Heads of States. He said he can’t accommodate all that. I am not quite sure that when he assumes office for his second term, he is going to be very happy with senators or public officials taking what is not their due. He will beam his searchlight on everywhere. So, Nigerians should look forward to many people crying because they have no access to free money. He will even do more to ensure that people return what they have illegally taken whoever you are. That is why these people don’t want him to come back because they know him as a strategist. He is waiting for his reelection before he deals with many of them.”

Do you think the postponement really affected the outcome of the elections?

“The fact is that INEC was not prepared for the elections and that was why it was postponed. On the eve of the election, February 15, materials to be used in some states were still at the airports. The weather was not conducive for them to transport the materials. So, how would INEC have conducted the elections? Although everybody was angry because of the postponement, it paid of eventually because it gave INEC more time to prepare and the outcome has been commended by both local and foreign observers.”

Having failed in their bid to regain power which they lost in 2015, what is your message to the PDP?

“The PDP should really go back and restrategise and work hard to refurbish its name because that name is not refurbished enough for Nigerians to forgive them.”

Are you suggesting a name change?

“No, I am not suggesting change of the name of their party. What if they change their name and their conduct didn’t change? You can take the pig out of the bush but you cannot take the bush out of the pig. They said they have apologised but have they done the needful? It is just like a thief who apologized for stealing but refuses to return the money he stole.

“If PDP said they have apologised to Nigerians, why can’t they return the money they took while in power?

“From the behaviour of PDP and what they did, from the primaries to campaigns and the elections, they have not changed. They have access to free money and they spent the money heavily. Just imagine somebody saying that he will sell the refineries even if he dies doing so. What type of statement is that?”

What is your message to Atiku Abubakar, the PDP presidential candidate who has rejected the outcome of the election and vowed to challenge it in court?

“Like I said, in 2015, former President Goodluck Jonathan called the winner, Buhari and congratulated him. That singular act not only made Jonathan a respected national figure, but also an international figure.

“Therefore, as a national leader, I will call on our friend, Atiku to call Buhari and congratulate him. That will make him not just a national figure like Jonathan, but also an international figure. Though court is an option, I advise him not to go to court because time will tell if he will get any reckoning after doing so. He should not allow anybody to deceive him. Instead, he should immediately call Buhari to congratulate him. That to me is the best thing for him to do.”