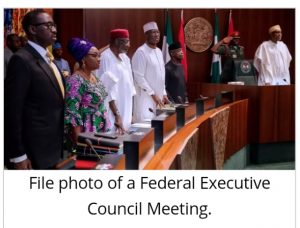 Following a hint by the Special Adviser to the President on Media and Publicity, Mr. Femi Adesina, that President Muhammadu Buhari might dissolve his cabinet before his May 29 terminal date, jostle for ministerial appointments by outgoing and prospective ministers have begun, THISDAY learnt Thursday.

Adesina had told Arise TV, a broadcast arm of THISDAY, that Buhari might dissolve his cabinet before May 29 to pave the way for a fresh team that would help him navigate the new tenure he won last Saturday.

“One thing about governance is that the first mandate was for four years and it lapses on May 29, and shortly before May 29, the president is likely going to officially dissolve government, that is the way it is usually done – he says thank you to everybody he has called to work with him and then, he dissolves that government officially. Then when he is inaugurated for a second term, he now reconstitutes government. He appoints his personal aides; he forms the cabinet; he appoints people to fill other positions,” he said.

THISDAY gathered that intense lobby had begun with outgoing ministers reaching out to the president’s kitchen cabinet for support.

Some of those said to be close to the president who have come under intense pressure to support the ambition of prospective ministerial nominees, include his wife, Aisha; uncle, Mamman Daura; Attorney-General of the Federation and Minister of Justice, Abubakar Malami; Chief of Staff, Abba Kyari; and close ally and former member of House of Representatives, Alhaji Mohammed Faruk.

Already caught by the lobby bug, THISDAY understands, are some ministers who believed they had performed in their first term of office, including the Minister of Power, Works and Housing, Mr. Babatunde Fashola; Minister of Transportation, Mr. Rotimi Amaechi; and Minister of State for Petroleum, Dr. Ibe Kachikwu.

Also pushing for appointment are members of the All Progressives Congress (APC) Presidential Campaign Council, who believed they had worked so hard to deliver Buhari. Leading this pack, according to presidency sources, is the Director of Strategic Communication, Mr. Festus Keyamo SAN, who energetically took the bullets for the president and spared none of his traducers.

THISDAY further learnt that some of the candidates who had their governorship and related ambition aborted, including Rivers State APC gubernatorial candidate, Mr. Tonye Cole, have also begun to make contacts.

Adesina, who had told Arise TV that it should be expected that Buhari would relieve his ministers of their appointments as the curtain falls on his tenure, also took the opportunity of his appearance to shed more light on the appointment of military service chiefs by the president, explaining that Buhari’s choice is not subject to the principle of federal character enshrined in 1999 Constitution as altered.

He said the principle, which was established to engender equitable distribution of appointments at the federal level among the 36 states of the federation, was not applicable to the security agencies.

Adesina’s clarification was an apparent response to widespread criticism of Buhari’s security appointments, thought to be lopsided in favour of the northern part of the country.

The presidential spokesman explained: “It is not every position that is subject to federal character. Federal character affects the cabinet. That is why it states that each state must have a minister. But there are some other positions that are strictly at the prerogative of whoever is the president, and that includes the service chiefs. That is one area that you don’t sacrifice competence on the altar of, maybe, balance.”

He insisted that security is not subjected to federal character and should not be treated as political appointment.

Adesina spoke on Buhari’s priorities in his impending second term and said the president mentioned at almost all his campaign stops that he would be focused on securing the country, reviving the economy and fighting corruption.

“It will not be limited to those three, but those three will continue to be fundamental to the government. So, if you want to objectively compare now to May 2015 when this government came, the security, you will know that there is a big and wide difference. Yes, there are still challenges, but then, those challenges are being tackled.”

He insisted that the government is not in denial about the security challenges in some parts of the country.

He insisted that such persons must have been adjudged as corrupt before the tag of being corrupt can be stamped on them.

He said being prosecuted is not the same thing as being corrupt, adding that some people who had been accused in the past had ended up being acquitted and discharged.

“Acquitted means they can’t be tried again. Those allegations cannot be brought up again. There will be no substance to them. So, the fact that you are being tried does not mean you are already corrupt. The law does not work that way. The law states that when you are pronounced guilty, and you have gone through all relevant courts and at the end of the day the courts have said guilty, that is when you are a guilty man.”

Adesina decried the number of deaths recorded during the polls, saying that Buhari had commiserated with the families of the deceased, regretting that it should not have happened.

He said election is not war, expressing hope that going forward, elections in the country should not be a do-or-die affair.

“It is clearly explained in that document,” he insisted, adding that those are two of some of the key things that the president is keen to implement.