* A comfortable pillow, for Bindow, to rest his head, with stretched elbows, as the wind blows, through a wide window, not for the widow’s son, eying Dougirei Hill – A Poet 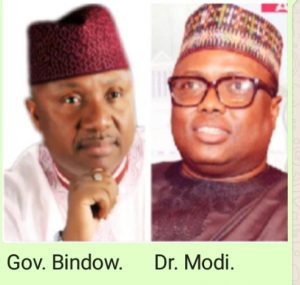 The electioneering atmosphere was murky, defining the hopeful candidate to Dougirei Hill, the seat of government in Adamawa state, some weeks previously.

“One can’t really say for now, until after the presidential and national assembly elections. Four governorship candidates are strong you know, APC Bindow, PDP Fintiri, ADC Nyako and SDP Bello,” a political pundit puts it.

Before the presidential election, ADC’s Sen. Abdulaziz Nyako was, as the survey revealed, leading the popularity test with 68%. He was followed by PDP’s Rt. Hon. Ahmadu Umaru Fintiri. APC’s Governor Muhammadu Umaru Jibrilla Bindow was further away from reclaiming the Dougirei Hill, taking the third position, while SDP’s Hon. Emmanuel Bello followed steadily behind Bindow.

After the presidential and national assembly elections, the permutation suddenly changed, with PDP’s Fintiri hitting the top popularity list with 76%, followed by APC’s Bindow, though dropping 53% to be closely followed by APC’s Nyako, while SDP’s Bello steadily, maintaining the behind position.

This would not be unconnected with the issue of the alleged certificate forgery filed against governor Bindow, which subjected the electorates in the state to the position of indecision.

However, when the jurists dismissed themselves of lacking the jurisdiction for adjudication in Abuja, a window was then opened for Bindow to breath the Dougirei air, however with difficulty, because there was a house disintegrating in animosity as much as the aggrieved who would want to vent their anger using PVC Saturday.

The painted imagery would be uncomfortable to the ruling party that would insist on mending fences, cementing the cracked wall. I aptly captured this where I wrote what you could have read the following:

“Swords Against Selves That Can’t Fight The Opposition

“You guys, sheath your swords. You should all donate a stick each, to make unbroken broom, to be able to clean the filth infested by the uncultured and unkept from among you, before you are shamed by a humiliating defeat.

“There’s a horrific hurricane polls, Saturday. it’ll only take a collective effort to confront, to challenge any attempt at humiliation

“It’s only through a cracked wall that an antagonist penetrates for insulting assault, a humiliating defeat.

“Baba B, doesn’t want to hear any story. It’s not the time for a blame game. Defeat will be intolerable. Victory is the only language.

“Baba B, wants to have courageous children who overrule by overlooking each other’s weaknes(es) and are strong in unity for victory.

“We equally urge you to withdraw your poniard knife from use, at least for now,” I’m told.

“The truth is, three years isn’t enough for me to lambaste a leadership that tempts the aristocracy I have a footing, for a humiliating destruction.

“The law though has spoken, the parties haven’t yet reconcile. Another, law will speak next tomorrow. However, exposing an opposition to a danger one will eventually be humiliated with, sounds an illogical Saturday.

“We’re cautioned against any action ruled by EMOTION.
We’re advised to be PATIENT and prayerful for PEACE.
We equally learn the art of FORGIVENESS.

“We’re however encouraged to be courageous in fighting to reclaim our right with caution against collateral damage, while praying for PEACE.” I wrote some days before.

The second factor that affected the permutation was the alleged involvement of CAN with some church into politics by endorsing a PDP governorship candidate, where I analysed in a piece under the title: “Church, CAN campaigns, kill contesting candidate in Adamawa to Dougirei Hill”.

Bindow humbled himself, submissive to the accusations of his weaknesses cocooned under the “to err is human”, sought for forgiveness and pleaded for the second chance with a view to mending fences.

The Adamawa elites and electorates who sought for unity and mutual coexistence between religions and among ethnics for ethical peace, faulted those who took to deploying religious sentiment in Adamawa politics, thereby withdrawing their confidence on the religiously favoured candidate, with a view to cushioning the heated polity capable of causing dissension, considered as archaic and retrogressive to meaningful civilisation.

There was also the mending fences within the ruling party with a view to retaining its governorship hold in state state.

The picture painted, is what made governor Bindow to hit 88% chances of retaining Dougirei hill and still counting.