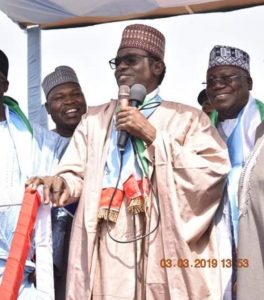 It was a sunny weekend. The sun was biting, the vehicle was overheating, travelling a long distance to Damaturu the Yobe state capital.

The drafted team from Abuja and Yola, met at the Jewel in the Savannah before proceeding to Yobe.

There was a campaign train mistaken for governor’s convoy in Yobe.

We should pack our vehicle to cool down. Dr. Marie Ann suggested, having been attracted by the campaign train.

Governor Gaidam of Yobe was not leading the campaign. He could not have been through, celebrating his Saturday victory; winning senatorial seat for a metamorphosis from the executive to legislature, from the governor to lawmaker.

He could be on official assignment. Perhaps, away from the state.

Our team was spotted by APC chieftain in Yobe. He disengaged himself to get to where we, playing the introverts, stationed ourselves.

“You’ve finally made it. Welcome to Yobe, ” he said.

It was not our first time of being in Yobe. However, it was the first time to honour this special invitation.

“You must get closer to capture everything,” he said.

We would want to capture the mood of the moment. I told him that our reporters have since started working and that those of us standing, were only but image-reflection of the Periscope Global reporting politics. He did not seem to understand but swallowed it all the same.

Nura Mohamed asked why Governor Gaidam did not lead the campaign train, in solidarity to his boy to be successor.

“Hon. Mai Mala Buni is a household name in Yobe. he steadily matures in popularity and is almost outshining his boss.

“APC is lucky to have this personality as its gubernatorial candidate in Yobe,” an electorate remarked.

Nura Mohamed would report that Buni did not have to buy people’s confidence with money. His charismatic character sung Christmas carols.

His human relations, humanitarian services, philanthropy and generosity in general, endeared the electorates with their siblings to his favour.

Buni’s political carrier started at a grassroots level from councilor. He held the APC northeast zonal leadership, before being elected the national secretary of the ruling party.

His endorsement was unanimous when the Yobe people, in tune with the “not too young to rule” philosophy, decided to mandate Buni for governorship.

Governor Gaidam, joining the popular call, not only communicated but ensured that Buni did not surrender such a responsibility, respectfully honoured by the ruling party he served as its secretary.

From the eavesdropper, Dr. Marie Ann would gather that the gubernatorial and state assembly elections, would be APC sak Saturday in Yobe, a technical walkover, a fantastic victory.

However, Buni could start as a governor with an empty treasury owing to the alleged reckless spendings by governor Gaidam, recently.

The allegation was however challenged as being instigated by the anti Gaidam hate mongers.

The people in Yobe are estimated to be little above two million in population.

Yobe is said to be having one of the largest cattle markets in West Africa. There are equally, abundant mineral resources attractive to foreign investors, in addition to improving the internally generated revenue.

“With adequate security, transparency, accountability and good governance, whether or not Buni will inherit an empty treasury, he would deliver the dividends of democracy by actualising his manifesto, which spelt out good governance, motivating civil service, security against insurgency, food security, qualitative healthcare system, accommodating educational environment, youth and women empowerment and other Agendas in commensurability with the sustainable development goal.