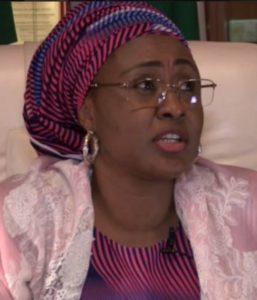 While the electioneering atmosphere in Adamawa state is being polluted, suffocatingly polarised by religious sentiment;

While the national body of the ruling party will not want to cede Adamawa state to any opposition party;

Dr. Aisha the wife of President Muhammadu Buhari, has called on the electorates in Adamawa state to go for credibility, competency, integrity and sincerity, armed with their PVCs Saturday with a view to getting the state out of the maze.

Mrs. Buhari, having prayed and given thanks to the Almighty God for the successful conduct of the 2019 presidential and national assembly elections, extended her appreciation to the entire electorates who entrusted their votes to her husband based on the pact he entered with Nigerians to the next level for a future assured.

Mrs. Buhari gave her take on the gubernatorial and state assembly elections coming Saturday, where she joined her husband insisting on voting a personality, a candidate based on capability, credibility and competency rather than political party affiliation.

Mrs. Buhari said, her opinion as an indigene of Adamawa, guided by the consideration of the hardships and disappointments experienced by the citizens associated with the previous governments in the state, the electorates should not terribly subject themselves into submitting to self-denials of exercising franchise, but ensure that they use their PVCs to humiliate deceit, exorcise the demons against civil service inhumanly manipulating the lack of prompt payment of salaries, battered the rot in education, tattered the dysfunctional healthcare system, sent the financial inequality, poverty and inhuman denials of social welfare, social security to extinct and PVC revolt against the lack of consideration of students’ scholarship scheme.

Mrs. Buhari banked on the credible worthy, knowledgeable candidate who would accommodate the voice of wisdom, seek for intellectual and be submissive to constructive advice devoid of deception and pathological lies.

Mrs. Buhari said, all these were because we’re in 21st century, presenting advanced progressive politics where the publics recognised the essence of their rights and how to agitate for, reclaiming it.

“O to ge,” “enough is enough Dr. Aisha seemed to have opined, tolerating clueless governor, ineffective and inefficiency led government that could reduce the state into a republic of liars.

Dr. Aisha called on the electorates to be wary of having defective memory, lest they are deceived into signing a forgery pact of leadership with a seeming camouflaged leader who would toy with their lives like yoyo after having kids-welcome him o yo yo only to be thrown away into the pool of indebtedness fill with financial thorns.

“This is my task. This is my take. Calling for the like minds in Adamawa state, nursing similar philosophy to keep sentiments aside in casting our votes, to opt for credibility, integrity, transparency and competency,” Mrs. Buhari said.