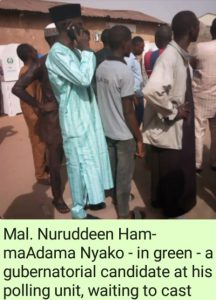 The Adamawa state governorship and state assembly elections, as predicted, are recording unimpressive turnout of the electorates, the Periscope Global reporting politics will reveal.

Most of the electorates based outside of Adamawa state will have an unexercised franchise.

“Our concern has been with the presidential election. We voted and prayed for the best; for peace, unity, integrity, sustained security, economic recovery and good governance. It may not be our choice. However, we believe, God has finally eventually, responded to our prayers decided for us, the best president,” Freedom Adamawa indigene based in Abuja said.

“I can’t bear the cost, conveying my family from Kaduna to cast my votes in Yola, just two weeks after presidential election. In fact, it amounts to financial discipline,” Hamza Adamawa indigene based in Kaduna said.

Similarly, some of the electorates based in the state capital lamented the condition that warranted the self-disenfranchisement; they could not travel to their polling units in their various local government areas.

Some of the electorate who are not far from their polling units interviewed, said none of the key contestants, appealed to them as being worthy of their mandate.

“One gets confused when one goes by Dr. Aisha Muhammadu Buhari’s checklist on the contestants. Not to reduce the state into republic of liars led by ignorant that will not consider workers ‘salary as any worthy, not to be shamed by anti graft, frequently visiting the state on account of financial indiscipline resulting from wrong choices, we simply opted for a self-disenfranchisement now that we have a trusted man of integrity as our president,” Shehu an electorate based in Yola north said.

However, the polling units the correspondents visited so far across the state, the electorates conduct themselves peacefully with the majority waiting to be accredited and eventually cast their votes.

The electorates interviewed, commended the exercise, the INEC staff and the security.

Do not be shortchanged, electorates must cast their emancipatory liberationist votes with ease in peace.