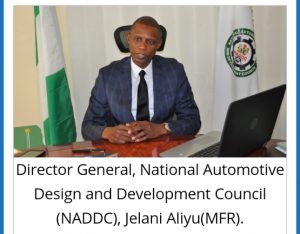 Industry experts who spoke with our correspondent also said that the automotive industry in Nigeria has been on a stand still due to internal strife in the Council.

They also pointed to the non completion and commissioning of the emission Control centers located in someparts of the country since last year as parts of the internal challenges the council was grappling with.

“the inability of the council to get the NAIDP passed into law is a clear indication that internal tussle for power andControl is slowing the NADDC down from going ahead with its lofty plans for the industry,“ Chief Eze Chukwu an auto investor in Lagos, said.

Eze pointed out how the contract for a road was awarded by NADDC without due process, questioning what thebusiness of the council is with road construction.

In another development, Randy Odogu, an industry stakeholder based in Abuja, said the appointment of a newdirector of finance for the council may be affecting also be affecting the council.

According to a an iex employee who pleaded annoynimity, the acting director of finance was recently brought infrom somwwhere out the NADDC to perfect the objectives of those that sent him.

It was gathered that the Director General of NADDC, Mr Jelani Aliyu, may not be aware of the massive acts of power broking that the council was enmeshed in.

Attempts to get the Council to respond to these issues were not successful as calls made were not returned.