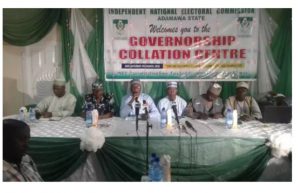 The Returning Officer Prof. Andrew Haruna the Vice Chancellor of the Federal University Gashua declared the result inconclusive after collating results from the 21 local government areas of the state.

Haruna said the election was inconclusive because the number of rejected votes cast were more than the leading margin between the two major contenders; governor Muhammadu Umaru Jibrilla Bindow of APC and Rt. Hon. Ahmad Umaru Fintiri of PDP.

ADC’s Sen. Abdulaziz Nyako was the third runner who was left some distance behind having scored (the spoiler votes) 113,205

The difference margin between the winner PDP and the runner up APC was just 32, 476 votes.

Haruna, based on the above mentioned results, announced that there would be a rerun election in 44 polling units where elections could not be concluded to be able to determine the actual winner of the gubernatorial election in the state.