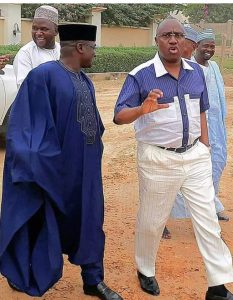 Please accept my condolences on your impending defeat after the rerun election which will hold on March 23rd, 2019.

2. APC is my party and you are my candidate, but the unassailable lead of your opponent renders the rerun election a mere academic exercise to confirm PDP’s victory according to Nigerian laws.

3. Sir, times like these also call for sober reflection, so let me recall some of the missteps of your administration, in hopes that we may learn useful lessons.

3. In December 2015, your SSG Dr. Umar Bindir told some engineers paying him a courtesy call that the main problem of Adamawa State was the Fulani ethnic group, especially “Yola Fulani”. The Yola Fulani rightly took a strong exception to this ethnic profiling and hate speech by a government official.

4. Though Dr. Bindir later issued an apology, the damage was done. Fulanis felt insecure under your government, especially when you failed to sanction Bindir even with a mild rebuke.

5. A year later, your Chief of Staff Abdulrahman Abba Jimeta (now deceased) – who always bragged that he was Bata and not Fulani – followed Bindir’s foot-steps by declaring that your government was for “minority tribes, not the majority tribe which had retarded progress”. You were there in person, commissioning a new road in Numan.

6. The message was very clear, so much that when Jimeta died in Saudi Arabia, fellow Muslims on Facebook wished him a happy after-life devoid of the Fulani that he loved to hate, instead of the usual prayers.

7. Other missteps contributed to your defeat, such as your depriving LGA staff of their salaries, your lopsided road constructions that deprived Yola Town of new roads, and your countless unfulfilled promises that earned you the moniker “Digital” even before you became governor.

8. All of them regrettable, but blame yourself as the architect of your misfortunes. In fact, I’m consoled that we Fulanis don’t stab people in the back. No, we prefer frontal attacks.

9. Sir, the Yola Fulani you love to hate have re-elected you, just like in 2015 when we chose you over our kinsmen Dr. Modibbo of PDM and Nuhu Ribadu of PDP.

10. On the contrary, Yola North and the LGAs of your beloved “minorities” have rejected you for Fintiri. The attached INEC result for Adamawa State makes that very clear.

11. I conclude by now asking you who are the problem of Adamawa State? If you lack the answer, I can wait beyond May 29, 2019, when you will have enough time to contemplate on your legacy.

12. Sir, you may not be on facebook, but I have no doubt many of those hungry fools working as SAs and PAs to politicians – and writing to slander us for stating our opinions on governance – will show you this message.