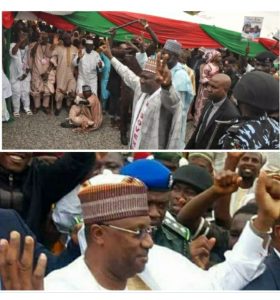 While APC the ruling party rejected the results of the gubernatorial election in Adamawa state, alleging INEC officials and security operatives of complacency to rigging in favour of, PDP, among other opposition parties, commended the conduct of the election and welcomed in good faith, the supplementary elections, which could however, as the party members conceived, not change the permutation to transfer victory through the window to Bindow.

Following the insinuations that the APC gubernatorial candidate in Adamawa state, facing a humiliating defeat to be the first governor to be knocked down having served only for one tenure, went soliciting for presidential favour with a view to manipulating a safe landing to save the party from loosing the state, the Adamawa state chapter of the People’s Democratic Party (PDP), has called on president Muhammadu Buhari not to yield to desperate moves of APC leadership in Adamawa State to truncate the upcoming re-run election slated for March 23.

Barr A. T. Shehu the PDP Adamawa State chairman made the call during a press conference, Wednesday in Yola.

President Muhammadu Buhari has assured Nigerians of non interference and that electorates were at liberty to vote for the capable candidates that appealed to them irrespective of political party leaning, not to be casualties of clueless and irresponsible government, Barr. Shehu stated that as a father of the nation, and in line with his time tested principles, Buhari would not yield to the democratically unethical pressure of the APC leadership currently planning to truncate the electioneering process for self serving purposes.

“It has come to our attention the desperate moves by the leadership of the Adamawa State government to upturn the mandate of the people.

“One of the alleged moves is to lobby the presidency to cause the State High Court to slam the INEC with an order of injunction restraining the electoral body from conducting the supplementary election and cancel the entire elections.

“They intend to use a governorship candidate who allegedly claimed that the logo of his party was omitted on the ballot in the last governorship election to file a case before the State High Court.

“We know that an election was held, returns have been made from units, wards, local government areas and even state collation level on the election.

“To our understanding, it is only the election petition tribunal that can adjudicate on election matters after election has been held.

“The case of Adamawa State governorship election cannot therefore be an exception. It is obvious that the desperation by the outgoing government in Adamawa State to hold on to power knows no bound.

“We find it curious to observe that the same leadership of the state who did not put much effort to ensure that Adamawa was delivered to President Muhammadu Buhari during the presidential election, is today all over Abuja, allegedly the presidency, to rescue him from losing the state,” Tahir said.

It would appear that other opposition parties have since rallied round the PDP candidate, calling for credible supplementary polls to be born by free, fair and peaceful election.

“We do not want a forged election results. We want the 2019 governorship in Adamawa to be based on sincerity and objectivity, transparently, devoid of any deception. We want to have this begin with credible election”, one of the ADC stalwarts said.