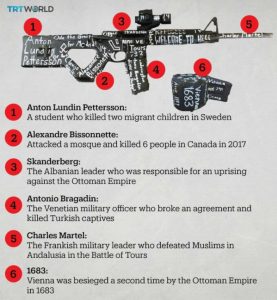 This is not intended to increase the grief of people but to show the conspiracy and the underground plans which surrounded this harrowing event, wallah its obvious that it’s a sponsored and pre-meditated attack, for the following reasons:

– How could one man take down a whole masjid single-handedly and so confidently without the fear of being killed by the worshippers or even the fear of the police rushing to save the situation, yet the attack lasted for over 10 minutes.

-On his way to the location, he connected a camera to his mask or helmet, which he also connected to his phone so the video can stream online live, if it was not planned, how can a common killer have the confidence to air a crime video when he knows anyone from NZ could be online watching at that time and foil his plans?

– On his way going, at a point he turned the camera to show his face willingly, why would a criminal show his face to the world when all criminals are known to hide their faces?

– He connected the camera when he was still quite fat away from the masjid, hence the camera showed his driving route all the way to the masjid, and even after the attack he didn’t switch off the camera, rather he was still showing all his escape routes to the world, what kind of common criminal does this? Yet he still went away Scot free

– When he arrived the location of the An’nur masjid, he parked by the road side quite close to the gate of the masjid, he ‘confidently’ brough out his long assault rifle (not even a shot gun he could have hidden in a pocket) rather he brought it out openly and held it in his hands boldly to make it obvious that he is about to use the gun, he saw some people outside the gate but didn’t harm them, perhaps he felt that if he shoots those people outside, those in the masjid who are his main targets would have fled before he gets inside. So he went inside the gate and was heading to the main door, then he started shooting (I don’t need to explain the shooting scenes)

– At this stage, the video was already running for more than 7 minutes online, and the gun was not a silencer, the shots were loud for Allah’s sake, even the cars passing by could hear it, does it mean none of this passerby contacted the police in an attack that lasted for more than 10 minutes in the middle of the city and not even an outskirt?

The residents of the area claimed they all heard the shots for several minutes and they heard the screams, didn’t any of them call the police? Yet it was reported that the police only came 15 minutes after the crime had happened.

– Another observation was that he was walking majestically throughout the operation, he neither ran nor hastened his steps at any point, he even entered the masjid confidently and kept shooting without him being afraid that what of an ambush was waiting for me outside, if this was not planned underground? 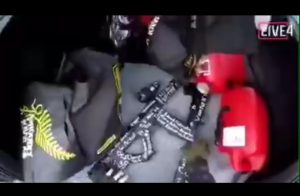 – Where he parked his car, he left his boots open and there were other ammunition in the boot, he didn’t even mind that what if a passerby sees them and uses them to fight him?

– When he was running out of bullets, he went out majestically outside the gate all the way to his car again, he dropped the first gun and took another gun and still left his booth open again. He proceeded into the masjid again for the second time, this time around he didn’t enter the gate directly, he went round the fences shooting at the people outside, cars were still passing by at high speed though, the police were still nowhere to be found, he went inside again and started shooting all the victims all over to make sure they are truly dead.

– When he was sure that there was no soul breathing in the masjid anymore except his own, he started walking out, on his way out he saw a Muslim woman who perhaps had been hiding somewhere in the masjid who was trying to jump out through the fence, he quickly shot at her, she still managed to jump off, this was where the criminal finally hastened his steps perhaps to make sure she doesn’t escape, on reaching outside he saw her on the ground screaming: help, help, help
He confidently finished her at close range.

– Then he majestically went to close his booth and zoomed off, on his way going he still used the gun to break his front mirror and one of the side mirrors, because he was still shooting at some people who were on their way to jum’ah, the question here is: ‘if he was afraid of being arrested or if he was actually ‘escaping’, why did he break his glasses and kept shooting at people when everyone can easily notice a car whose glasses are broken let alone if the driver is armed while holding a gun boldly? I don’t think there is are security patrols or checkpoints in that vicinity.

– Finally, if it wasn’t planned as a conspiracy, how can a man intend to finish a masjid without thinking of at least going with a partner who he will use as a backup in case anything goes wrong, it’s just like an armed robber attacking a bank all alone while walking majestically and airing the video live, this has never happened anywhere.
.
As for the second attack which was at Linswood masjid, there was no video to that effect and it’s not known whether it was the same criminal that still went there or someone else, but the summary of that one is that there were about 70 people in that masjid, when the criminal got there he started shooting at the elderly people closest to the door, he had shot at about 9 people when a brother quickly manoeuvred his way and pounced on him, they started dragging the gun and in the process the gun fell down, then the criminal started running away, the brother picked up the gun to shoot at him but the trigger was stiff, perhaps it had hooked or the brother didn’t know how to shoot or cock the gun, so the brother started chasing him but he jumped into the car and fled finally.
.
It is high time we realize that as much as the ultimate security is from Allah, we need to embrace the sunnah of having brothers on Ribaat in every masjid, had there been brothers know guard, Even if they are not armed, they would have already stopped and questioned him at the gate, however everything has happened as decreed and it’s a lesson to us all across the globe.
Surprisingly, the senator was blaming the attacks on the Muslims and now the security forces are saying the serial killer has a mental problem, the media propaganda are always in the same manner but the Muslims should wake up and start taking security measures, because the blood of the Muslims are cheaper than water to this beasts. May Allah heal the injured and Grant the dead paradise, ameen.