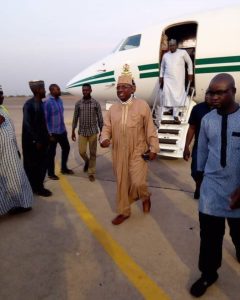 When governor Bindow of Adamawa state arrived Yola from Abuja, Monday with the presidential jet, observers began insinuating that all was now well between Dr. Aisha the wife of President Muhammadu Buhari and Bindow, opening a window for a fresh wind blow and through which another political angle relating to legal issues beyond supplementary election in Adamawa state, could be visualised.

Political pundits who are equally conversant with the Nigerian constitution, having agreed that what is morality may not be in commensurability with what is law, debated on the possibility or otherwise of conducting a gubernatorial rerun election slated for Saturday by INEC in Adamawa state.

This was sequel to the case filed by Rev. Eric Theman popularly known as Dollars the gubernatorial candidate of the Movement of the Restoration and Defence of Democracy (MRDD) against INEC before a High Court sitting in Yola for omitting the logo of his party on the ballot papers.

Recall that the Periscope Global political angel reported Dollars as saying that governor Muhammadu Umaru Jibrilla Bindow of All Progressives Congress (APC) and Rt. Hon. Umaru Ahmadu Fintiri of People’s Democracy party (PDP) were candidates whose scored votes were being challenged before the High Court as a result of the refusal by the Independent National Electoral Commission, INEC, to include the logo of his party in the March 9th, 2019 governorship election.

Dollars was demanding for a fresh election to be conducted in Adamawa state to be able to factor him and his party into the gubernatorial race in the state.

Adamawa high court, the Periscope global reported, hearkened to Dollars’ prayer by directing INEC to suspend the rerun election and in another prayer, to cancell the entire gubernatorial election held in Adamawa state for a fresh, no disenfranchised exercise.

INEC in Yola, which earlier said it would conduct the rerun election in spite of the court order because Yola High Court lacked the jurisdiction to stop the electoral umpire from carrying out its statutory obligation, has eventually made a u-turn with the declaration that only the ruling slated for Thursday being tomorrow at the High Court sitting in Yola that could determine whether or not there would be a supplementary election.

Earlier on his take, Dr. Umar Ardo a PDP stalwart said INEC must not disobey court order, should the order has any constitutional merit.

The faith of  the Saturday supplementary and indeed the entire gubernatorial election, will finally eventually be determined by Justice Abdulaziz at the Yola High Court sitting on Thursday being tomorrow.