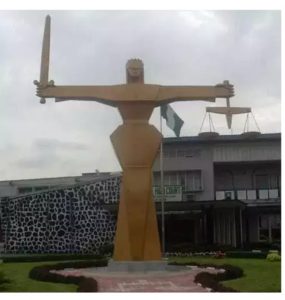 The Governorship supplementary polls in Adamawa state earlier slated for March 23, 2019 has been put on hold indefinitely as a Yola High court fixed March 26, 2019 for ruling.

The interlocutory injuction stopping the rescheduled election was granted to MRDD and its supposed candidate, Eric Theman on the grounds that his party logo was not on the ballot paper.

Earlier appearing before justice Waziri, counsel to the PDP candidate, Ahmadu Fintiri, Barr. Joseph K Gadzama (SAN) leading 8 counsels had filed a motion for Fintiri the PDP candidate to be joined in the suit.

Also counsel to PDP, Okechukwu Udeze (SAN) leading six others, also applied for PDP to be joined in the suit.

Barrister Adeyemi Pitan, counsel to MRDD and Eric Theman, however opposed the motion of the two parties on grounds that the two applications were not served on him in due time.

The MRDD counsel said the only business of the court for the day, was the March 14, interlocutory injuction ordering the stoppage of the supplementary election not the hearing of any motion, the ruling to that effect, favoured Dollars prayer.

Lead counsel to INEC, Tanko Inuwa (SAN), however, prayed the court to discharge the injuction on grounds that it has no jurisdiction to entertain the case.

Inuwa cited section 25 sub section 1 of the constitution saying that “INEC being a federal organ challenging its decision should be through a federal high court not a state high court.”

Inuwa said that MRDD has no locus to approach the court because they have not fulfilled all the electoral process noting that they have no interest in the case.

Adjourning the case to March 26, Justice Waziri ruled that he needed time to study the voluminous documents submitted by the counsels to the various parties.

The supposed candidate of the Movement for the Redemption and Defence of Democracy (MRDD), Rev Eric Theman Dollars, has taken a temporary residency at the Yola high court today to escape the fury of irate youth who were not happy with the role he was playing in scuttling the conduct of supplementary gubernatorial election in the state.

Theman has last week obtained an interim court order barring the Independent National Electoral Commission (INEC), from going ahead with the conduct of the gubernatorial supplementary polls slated for March 23.

Some angry youths who accused Theman of being unpatriotic, playing the crudest democracy in the name of challenging being shortchanged, and disloyalty to the state for personal gains vowed to deal with him for causing so much tension and anxiety in the state.

The youth during the session, statuoned themselves at strategic positions so that he would not slip out of the premises undetected.

As the atmosphere became charged with anxiety, news reached Theman that he should not come out of the court room for his personal safety making him to remain in the court for hours till the angry crowd dispersed.

The Periscope Global Investigate would want to have Theman’s take on the court ruling and the intended mobs action against him. these have however remained another inconclusive finding as he sneaked out of the court room unnoticed for his safety.