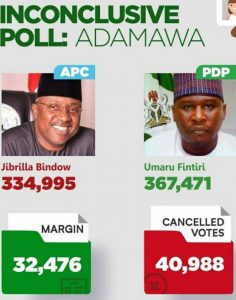 The INEC rescheduled supplementary election for today being Thursday holding in 40 polling units across 14 local government areas of the state with 40,998 votes to be contested for by the political parties but particularly, by the candidates of the Peoples Democratic Party and the All Progressives Congress, though peaceful, as INEC has assured adequate security, was however low-keyed as observed by our correspondents. 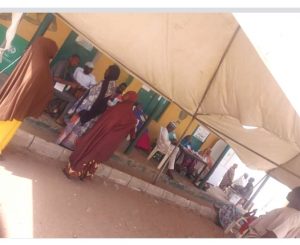 Recall that the The PDP candidate, Umaru Ahmadu Fintiri, was leading with 32,476 votes margin from the first election after polling 367,471 votes while the candidate of the APC, Muhammad Umaru Jubrilla Bindow, the incumbent governor, scored 334,995 votes.

INEC declariled the election inconclusive because the victory margin was lower than the 40,998 cancelled votes.

Both APC the ruling party and PDP the principal opposition that was, before 2015 a ruling party, were confident that they would remain victorious.

If Fintiri won, Bindow would be the first governor in Adamawa state to face a humiliating defeat after serving a single four years tenure.