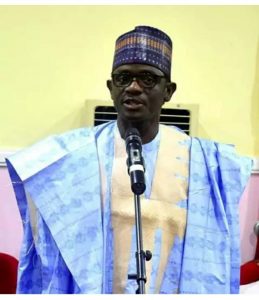 ADDRESS BY HIS EXCELLENCY, HON. MAI MALA BUNI, YOBE STATE GOVERNOR -ELECT, ON THE OCCASION OF THE PRESENTATION OF CERTIFICATE OF RETURN AS DULY ELECTED GOVERNOR OF YOBE STATE ON 28TH MARCH, 2019, AT INEC STATE HEADQUARTERS, GUJBA ROAD, DAMATURU.

Alhamdulillah, we give thanks to almighty Allah (SWT) for seeing us through the election period peacefully and successfully.

Today, in this auspicious occasion, we are witnessing the climax of the election process with the presentation of Certificate of Return to my humble self as the governor-elect, My Deputy His Excellency Alhaji Idi Barde Gubana and our 24 members-elect of the state House of Assembly.

We are humbled with the peaceful conduct of the elections in the state, which was generally rated by both international and local election observers as transparent, free, fair, credible and acceptable, signifying tremendous improvement in the electoral process through the various reforms.

The Independent National Electoral Commission (INEC), had no doubt enjoyed full scale independence and executed its duties free from interference and influence.

The sufficient compliance to the provisions of the electoral law by the Commission, gave more credence to the elections.

The outcome of the election was therefore, a true reflection of the people’s verdict. It was also an account, that the votes of the electorates truly count.

I wish to seize this opportunity to commend INEC for being upright to its responsibilities during the election. I was also more impressed with the swift measures taken by the commission to address emerging challenges by ensuring timely and adequate deployment of personnel, materials and equipment for credible and acceptable elections.

With these attributes, the business of conducting elections will always be easy, transparent and acceptable.

You should also carefully study the election process over and over again, to identify areas that should be sustained and those that need improvement. By so doing, INEC will continue to improve to the admiration of all.

I want to specially recognise the important roles played by our security forces throughout the electioneering period for a safe, secured and peaceful elections.

It is gratifying that there were no incidences of violence throughout the period. The civility demonstrated by the officers and men of the security outfits make you good ambassadors of your various organizations.

To the good people of Yobe state, the confidence you reposed in us will be adequately justified. We shall strive to ensure continuity, consolidation and expansion of the achievements recorded under the leadership of His Excellency our Governor, Alhaji (Dr) Ibrahim Gaidam Fcna, Fcpa, to make life more meaningful to every citizen of the state.

The commitment and fairness of the APC administration gave the electorates a sense of belonging. This made elections across the state more peaceful and easier.

The achievements recorded by the Governor Ibrahim led administration remain selling points for our party and the candidates at all levels, which translated into such a huge success.

I want to thank our traditional and religious leaders who always preached peace. I appreciate the election observers, monitor groups, as well as, the media who kept eagle eyes on the election process so as to promote justice and fair play and for our democracy to thrive.

I can not end this address without recognising candidates from other political parties who appreciated our competence and willingly pulled out of the race to support us. Your goodwill is highly appreciated.

Let me make a special recognition of our brother, Ambassador Umar Iliya Damagum, the People’s Democratic Party (PDP) governorship candidate, who after putting a good fight, conceded and called to congratulate us. He has made his position very clear, that he will not be going to the tribunal to challenge the election.

Ambassador Umaru Iliya Damagum, by this singular act has truly earned my respect and confidence. He has by this action demonstrated statesmanship by showing that the interest of the State supersedes his personal interest.

Now with the elections over, we will in the years ahead concentrate on programmes that are of collective interest and benefit to the people of the state. We will pay emphasis to policies and programmes that will project the lives of the people.

I therefore urge all and sundry to join me in the task of moving the State forward. This is a collective project. It is the Yobe project.