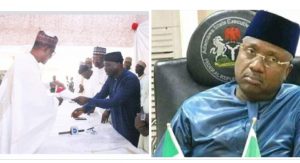 Bindow led government in Adamawa state, has inaugurated a transition committee, Monday that would make good the handing over of the new elected government slated for May 29, 2019.

Members of correspondent chapel, the Periscope Global Investigate will reveal, were not invited to cover the occasion other than the government house press crew, thereby constraining the aggressive media coverage and effective publicity of the event, particularly the online and mainstream print media.

Bindow was earlier said to have been advised by his media aids to subject the members of correspondent chapel to the poverty enough to send them either to the grave or out of the state before expiration of his tenure.

However, the action as was advised, rather than inviting poverty to correspondent chapel ended in constraining the Bindow led government of adequate media coverage with jaundiced media relations added up to the total absence of the impact of public relations in marketing his admiration. This takes another story

Rt Hon Umaru Ahmadu Fintiri the governor elect team, recognised the importance of media in promoting and projecting her programmes and has invited the entire media in the state to cover the inauguration of her 65 member transition committee, Monday, led by All. Ismail Numan.

Speaking at the Inauguration, Rt. Hon. Umaru Ahmadu Fintiri the governor elect, tasked the committee to ascertain the financial status by outlining the assets and liabilities of the state.

Fintiri urged the committee to clearly determine all the contracts awarded by the Bindow led administration, their current status, the amount of money spent and the outstanding liabilities on each of the contracts, in addition to the employments during the heat of the electioneering atmosphere.

While some political analysts, supportive of the system, lauded Fintiri for constituting what they considered as credible committee with necessary and desirable task to serve as compass guiding the ATM’s leadership, a group sympathetic to Bindow led government argued that it would amount to having plural leadership, for transition committee to metamorphos into probe panel, when both the Bindow and the Fintiri constituted transition panels would work in harmony.

Hyelda issued the caution in a release signed by his spokeman, Sam Tarfa, and made available to newsmen in Yola Monday,

Hyelda described the directive by Fintiri to the constituted transition committee as “unfortunate and a sign of ugly things to come. Bindow remains Adamawa governor till may 29, we can’t have two governors in one state,” Hyelda said.

Hyelda advised the governor-elect to be patient and wait until he was sworn in before given power of probe panel to his transition committee.

“There is a government in place and until May 29, 2019, that government should continue to work in the interest of the state and her people and also continue to carry out programmes and policies for the same purpose.

“To begin to harass or give directives to transition committee to verify list of government appointees, and letters of employment of civil servants in the state, is an act of hostility.

“The best that the governor-elect can do is to confront the outgoing government when he fully and finally takes over leadership, on any financial transaction he has reservations,” Hielda said.