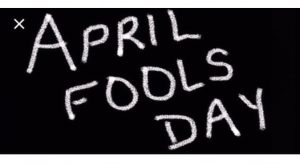 I received so many, but the same message from so many ladies via social media early today, requesting me to open an invitation letter to their wedding.

I knew the prank a long time ago, I was therefore, not bothered but simply replied, “the April Fool thing. I’m no fool.”

I preached against it as I have been doing, referring to them to some of my articles on April Fool like this one.

This article was published in the Scope NP 29-4th April, 2013 edition

Boy Aady did not know what it meant. He was not given the explanation he could comprehend. He heard some of his relatives accusing his mother, advising her never to do it again. He heard his mother saying with a smile that they should realise that it was a mere April fool.

Boy Aady’s mother could not explain. She told him to ask his teacher.

Many saw the first day of April as a time to perpetrate pranks, practical jokes and even lies, in the name of “innocent fun.” Every year on April first, people around the world would celebrate April Fools’ Day. Although customs and traditions varied, a common thread would run through the international celebration of first day of April. The teacher would explain.

Boy Aady would wonder how would a lie, typical of that, which earned his colleague two weeks ago, two weeks suspension from school, turn out to be celebrated even by his mother? What could have been the source of it? He would ask.

“April Fool is a relic of our colonial past. The tradition was inherited from our colonial masters who come along with it and never to take it back. A lie has never been accommodated in the African past. In fact, a liar was never to be entrusted with any trust. Hence, April Fool has never been legalised any day in our community.” The teacher would explain.

Theorists are agreed that the history of April Fool Day is clouded in mystery.

Suffices to say, history did not provide an authoritative source to determine the exact basis and origin of April fool.

“Although, it has been observed for centuries in several countries, the origin of the custom is unknown. It resembles other festivals, such as the Hilaria of ancient Rome (March 25) and the Holi festival of India (ending March 31). Its timing seems related to the vernal equinox (March 21), when nature ‘fools’ mankind with sudden changes in the weather”
(Encyclopaedia Britannica).

However, one theory had it that the festival was often posited as going back to the time of Prophet Noah (AS).

According to an English newspaper article published in 1787, the day had its origin when Noah sent his dove off too early before the waters had receded. He was said to have done this on the first day of the Hebrew month that corresponded with April.

Another theory hold that April Fool began when in the eighteenth century, Charles IX, following the Gregorian Calendar, decreed January 1, 1562 as the official New Year instead of the end of March/April 1 [Equinoxes].

Individuals who continued to honour April First were teased, ridiculed and played pranks upon.

“This must have been too much fun, it spread from France to England and then to the US. Now we have a day of havoc for us all to tread and enjoy. Now this story, the dates are all in dispute, proving time may be the best trickster of all.”

Regardless of its origin, people use April Fools’ Day as an excuse to “play the fool.”

Boy Aady was thinking of its implication, if it was he and not his mother, he would have been beaten for lying and committing deceitful acts by his uncles. He could read the annoyance from their faces.

The annual event called April Fool Day being celebrated worldwide has left behind traces of memories. Most times, it was that of humour by jokes being played on friends and well-wishers.

However, on some few remarkable instances, the jokes have proven to exceed the limit leading to some damages on the one on whom such pranks are being played, which brought about legal implications:

O.C.J. Okocha (SAN) argued that “April fool thing is a prank and practiced by people you call pranksters to crack jokes with their friends and associates.

“It is a joke and is not supposed to attract any legal consequences. But if somebody can be said to have knowingly or negligently led another person to incur loss and damages, then that person is liable for tort (the tort of misrepresentation) and so on and so forth”.

Similarly, Barr. Emmanuel Wilfred was quoted to have corroborated Okocha’s argument where he said that any misinformation would carry the full brunt of the law.

“I don’t think there is any exception on say you are exempted from liability for telling a lie on April Fool Day.

“Anybody playing a joke on April Fool Day should be careful of liability that may come out of it.

“That is why sometimes, you control the extent of the legal implications. I’m not aware of any law, which exempts one from liability for causing injuries to someone because it was done on April Fool Day.

“I have not read any case in Nigeria that has caused any injuries to someone because it was done on April Fool Day was exempted”.

From the religious point of view, Scholars in Islamic jurisprudence are agreed that any innovation and/or heretic imitations are forbidden.

A liar should not also be taken seriously in the society. In fact, the lie of whatever type in him should rather be flogged.

And from the Christian point of view:

“Is April Fools’ Day something Christians should take part in?
Is it godly?
Would Christ have participated in it?
What are the implications of it?
What does God’s Word say about the keeping of this day?”

These were the expostulations put forth by the Restored Church of God.

While replying, a clergy from the Church clearly analysed that, April Fools’ Day was rooted in the ancient pagan customs of this world.

“It was literally a day for fools! But you may wonder, where is April Fools’ Day mentioned in the Bible?”

Although God’s Word contains no direct “Thou shall not” command against April Fools’ Day observance, one can examine certain biblical principles and know that God does not approve of this day:

Also, God is the author of wisdom— not foolishness. He expects His servants to seek His wisdom (Jms. 1:5)— not play the fool!

“For from within, out of the heart of men, proceed evil thoughts, adulteries, fornications, murders, thefts, covetousness, wickedness, deceit, lasciviousness, an evil eye, blasphemy, pride, foolishness: All these evil things come from within, and defile the man” (Mark 7:21-23). He also said, “…whosoever shall say, You fool, shall be in danger of hell fire” (Matt. 5:22).

The basis for April Fools’ Day is also in direct violation of one of God’s Ten Commandments:

Pranks played on April Fools’ Day (in the name of harmless fun) are set in motion through lies, often leading to misunderstanding and confusion. Faithful Christians know that “God is not the author of confusion, but of peace” (I Cor. 14:33).

However, Chris Oluoh observed that the revolutionary trend in global information dissemination through the mass media and of course, the G.S.M. has brought a twist in the game.

While one can use the GSM to confirm tricky information in the name of April fool, several anonymous messages have been sent through wireless hand phones without the receiver being able to trace the sources, which often would lead to confusion intended for disintegration.

A critical thinker Yunusa Mohammed Abubakar would articulate that instead of let’s be April fools, lets, join each other on the table dining on mutual coexistence and collective rather, communal harmony devoid of rancour out of lies this April First. PEACE!