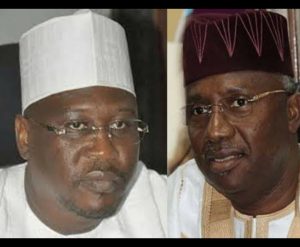 There is the undemocratic rather archaic tradition, some defeated chief executives in the country will not want to have it shelved in the primordial archive. “It is simply anarchist,” a postmodernist would condemn.

The last minutes bogus contracts awards without adhering to due process, fictitious appointments and employments of the unqualified and other fantastic rather fanatic financial atrocities, enough, the conspirators could conceive, to make the systems resist any success by having the state ungovernable for the would be successor.

The ATM Fintiri Adamawa governor elect, has been in the system not only as a speaker with the state house of assembly but as acting governor.

Through a personality Mr. Solomon Kumangar, to be regarded as spokesman, having served in that capacity previously and seemingly remains sane same, the Adamawa governor elect Umaru Ahmadu Fintiri alias ATM said he would expect the statesmanship exhibited by his outgoing counterpart to be reflected in all governor Bindow’s action going forward.

In this regard, the governor elect directed that all unnecessary expenditures and last minute employments, not done in the past four years, should be halted forthwith.

Similarly, Solomon reported his principal’s directives to the effect that “all last minute award of bogus contracts without following due process, are not advised.

“The governor elect opines that Adamawa belongs to all and any action to the contrary would not be condoned.

“It is therefore the expectation of Fintiri that governor Bindow reserves sufficient funds in the coffers, settles all debts and liability for the smooth takeoff of the incoming government.

“Banking institutions are hereby cautioned against giving arbitrary loans or overdrafts at this time as this will be at their own risk.

“Civil servants who get involved in shoddy transactions, aiding and abetting fraud will have themselves to blame if discovered.

“Fintiri advises the outgoing administration to be forthcoming with the true and accurate financial position of the state even without prompting.

“It is expected that the true accurate position so declared, will be made public in keeping with the principles of accountability, which the Governor-Elect is sworn to uphold.

“As a governor who holds the welfare of the citizens at heart, Fintiri will not sit back and accept anything less than transparency from his outgoing counterpart.

“Finally, the governor elect hopes that the outgoing administration will cooperate fully with the transition committee setup to oversee a smooth handing over come May 29 2019,” Kumangar Solomon said.

The Periscope Global, has yesterday reported reactions that celebrated Fintiri’s directives while inaugurating transition committee Monday, led by Alh Ismaila Unman, which seemed to some critics as though he was technically inaugurating probe panel that swore not to use any sword against any individual but to be free and fair to all for their reports to be credible.

“Kumangar’s interpretation of Fintiri’s position is a pointer that Adamawa state is presently led by parallel governments, when ideally, the state ought to be run by a governor not governors before May 29.

“Why should Fintiri direct, by threatening banking institutions against transacting with the administration in session before he’s sworn in?

“Do you know that governor Bindow inherited an empty treasury that had to be weeded out thorns of debts in tons, when he took over leadership in 2015?” A critic sympathetic to Bindow asked.

“Ok! Let’s assume its a probe panel set up but not to winch hunt, since Fintiri isn’t under any delusion of vendetta, bearing in mind also that Bindow himself or any credible authority from among his aids, has not made any public pronouncement to the contrary, why should the so-called critics degenerate to being alarmists?

“What are they afraid of? After all, they argued that the incorruptible Bindow has led a transparent administration?” An electorate supportive of Fintiri puts it in more of an expostulation.