*Monourve to consolidate power ahead of handover date – Political handler 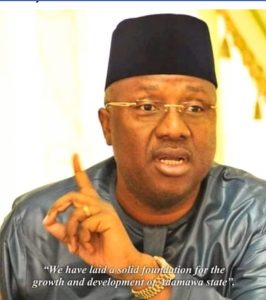 In a deft political move, Adamawa state governor elect, Ahmadu Umaru Fintiri has confined governor Muhammadu Umaru Jibrilla Bindow into the bin of political oblivion as he moved to consolidate power ahead of May 29, handover date.

Since his declaration as the governor elect by the Independent National Electoral Commission, (INEC), Fintiri has deployed a wily political move to get the endorsement of the political establishment in the state which would be instrumental to the success of his administration.

His incursion into the ranks of the All Progressives Congress has in no ambiguous terms depleted the support base of governor Bindow who is now on a self imposed political exile since his condescending defeat at the polls.

Fintiri’s move to capture the soul of Bindow’s strategic support base began shortly after he was announced the winner of the epic contest when he attended the marriage ceremony of the state chairman of the ruling party, Ibrahim Bilal.

It was said that during the event, a high wired political discussion has ensued where many hitherto political associates and acolytes of Bindow openly ditched him in preference to the governor elect as they said they were just with the governor for lack of a sustainable benefactor as a result of Bindow’s lacklustre attitude towards their welfare.

Sources at the wedding fatiha said during the occasion, which Bindow shunned, his deputy, Martins Babale was said to congratulate the governor elect with a promise to support his administration, a position believed to be a major setback for Bindow.

As Fintiri continued with his inroads into the support base of the governor, major political associates of Bindow, including Alhaji Musa Bororo, Bindow’s once strong man and political factotum, Friday paid allegience on the governor elect, a position, which put paid to the relationship between the two politicians.

Information pieced together by this medium indicated that a number of the APC stalwarts in the state have nurtured sustained bad blood against the governor because of his propensity for deceit and non welfarist posture, which Fintiri is now cashing on to castrate Bindow and render him a political eunuch even within the ranks of his support base.

“That is why he continued to get unfettered access and unalloyed support of the APC stalwarts apparently, as a payback to Bindow’s alleged maltreatment,” an APC stalwart in the state who did not want his name in print posited.

The latest move, which Fintiri made that further exposed Bindow as a lone ranger in his own party followed a condolence visit he paid on the former Secretary to the Adamawa State Government, Kobis Ari Thimnu over the demise of his 28-year-old daughter.

Insiders revealed that the occasion, offered Fintiri a rare opportunity to consolidate his robust relationship with both the former SSG, a strong member of the ruling party and ex governor Murtala Nyako with whom he exchanged pleasantries and banters throughout the condolence visit.

Signs of convivial relationship between Nyako and Fintiri came to the fore after Nyako’s eldest son who also contested for the plum office of the governor, unconditionally called Fintiri and congratulated him after he was declared winner by INEC.

In addition to that, the ADC structure whose absolute loyalty to ex-governor Nyako was unquestionable, was led by Nyako’s foremost loyalist, Umar Mijinyawa Kugama to congratulate Fintiri over his victory at the polls.

Another sign of a budding relationship between Nyako and Fintiri followed the inclusion of ADC members in the transition committee, which the governor elect recently unveiled.

Fintiri’s recent exploits especially, in the ruling APC, has so far proved fatal to Bindow’s political destiny as he faced bleak political future. But will the governor bounce back into political reckoning as we approach the handover date? Only time will tell.