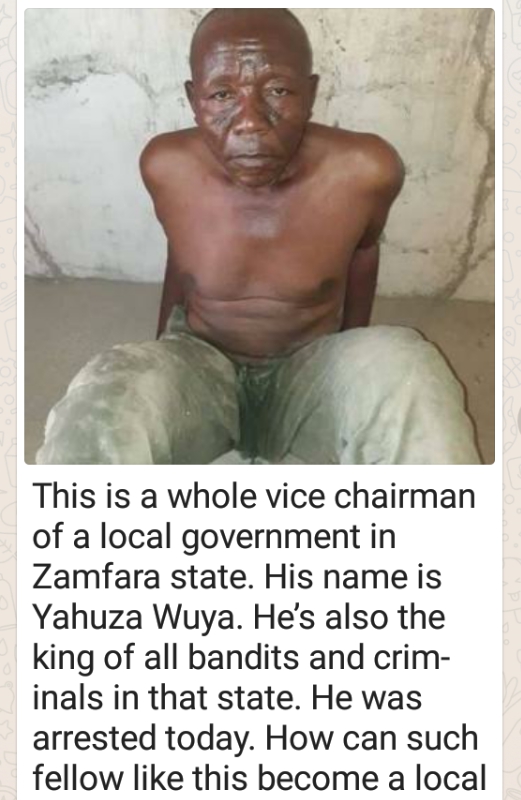 Troops of the “Operation Sharan Daji” in Zamfara have arrested the Vice Chairman of Anka Local Government of the state, Mr Yahuza Wuya for alleged link to bandits.

The Acting Information Officer of the operation, Maj. Clement Abiade confirmed the arrest of Wuya in a statement made available to newsmen in Abuja Thursday.

“Troops of Operation SHARAN DAJI in Zamfara State have arrested the Vice Chairman, Anka Local Government Zamfara State, Mr Yahuza Ibrahim Wuya on the 13th of April 2019 based on credible intelligence report linking him to bandits in Wuya and Sunke communities,” the statement reads.

“Mr Yahuza Ibrahim was allegedly reported to seamlessly assist in selling rustled/stolen cows and donkeys as well as giving information about troops, other security agencies and vigilantes’ movement to the bandits. He was also accused of aiding the release of a notorious gun runner one Sani Yaro from Gusau prison”

In another related development, the troops arrested two suspected informants along Burukusuma – Sabon Birni in Sokoto State. They are Mallam Ibrahim Bangaje and Mallam Ado Bayero.

The suspects would be handed over to relevant security agency for possible prosecution after initial investigation.

The Force Commander Operation SHARAN DAJI, Maj Gen Hakeem Oladapo Otiki reiterated the commitment of the troops towards entrenching enduring peace and tranquillity in Zamfara and its contiguous States of Katsina, Kebbi and Sokoto. He enjoined the public to support the operation by reporting suspicious activities and movement of bandits to close by security agencies for prompt action.