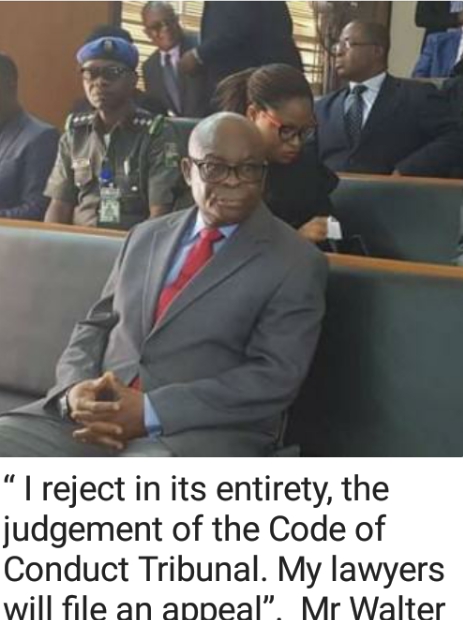 The former Chief Justice of Nigeria (CJN), Justice Walter Onnoghen, has appealed the judgment of the Code of Conduct Tribunal (CCT), which convicted him of charges of non-declaration of assets.

In a notice of appeal filed Thursday, before the Court of Appeal, Abuja Division, the former CJN averred that the CCT erred in law when it “dismissed his application challenging its jurisdiction and thus occasioned a grave miscarriage of justice

The Code of Conduct Tribunal (CCT) has convicted the suspended Chief Justice of Nigeria (CJN), Walter Onnoghen, and banned him from holding any public office for the next 10 years.

Onnoghen was convicted on six counts of false declaration of assets.

The CCT Chairman, Danladi Umar, during proceedings Thursday, held that Justice Onnoghen was not being charged as a judicial officer but an ordinary public officer.

Danladi stated that the tribunal had jurisdiction to try the defendant and that his prosecution was competent without regards to Section 158 Subsection 1.