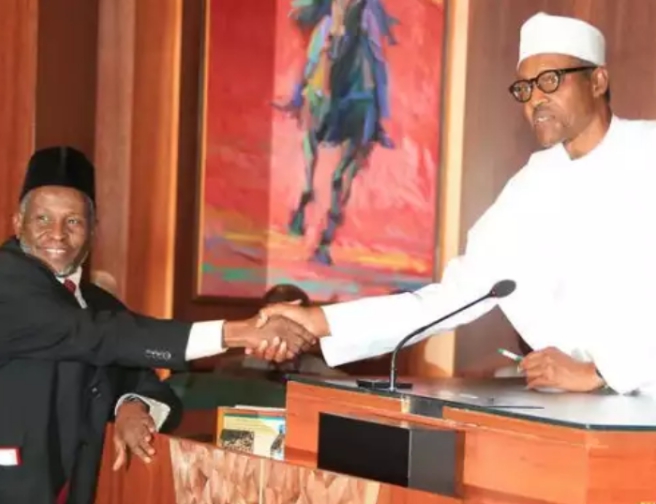 The National Judicial Council (NJC), at the weekend, approved the request of President Muhammadu Buhari and extended the appointment of Justice Tanko Muhammad as the acting Chief Justice of Nigeria (CJN) for another three months.

The decision to extend Muhammad’s appointment, according to a statement from the Council, was reached on Thursday April 18, 2019, at the Council’s 88th meeting.

The statement also cleared the air on reports by an online newspaper and a national daily that the body would be meeting next week to take a decision on Muhammad’s appointment as the acting CJN.

Signed by NJC’s Director of Information, Soji Oye, the statement read in part: “The attention of the National Judicial Council has been drawn to an online newspaper and a daily newspaper reports stating that the Council would meet next week to deliberate on the extension of the Acting Appointment of Honourable Dr. Justice I. T. Muhammad CFR, as the Acting Chief Justice of Nigeria.

“Contrary to the above, the Council actually met on Thursday 18th April, 2019 and at the 88th meeting considered and approved the request of President Muhammadu Buhari, GCFR, for the extension of the Appointment of Hon. Dr. Justice I. T. Muhammad, CFR, as the Acting Chief Justice of Nigeria for another three (3) months and Council has since forwarded its approval to the President.”

Acting on the orders of the Code of Conduct Tribunal (CCT), President Buhari had on January 25, sworn in Justice Muhammad as acting CJN, following the suspension of his predecessor, Walter Onnoghen over corruption charges.

Onnoghen’s suspension followed an exparte application by the federal government, seeking to suspend Onnoghen, pending the determination of his trial at the CCT over alleged breach of the Code of Conduct for public officers and was subsequently approved by the CCT.

The CCT, in its judgment delivered last Thursday, April 18, 2019, convicted Onnoghen on all the six count charges of false assets declaration preferred against him and ordered his removal from office as CJN, including the forfeiture of monies in contest.

The convicted CJN had on April 4, 2019, turned in the notice of his resignation to the president, but the president kept quiet until he was sacked by the CCT.

Onnoghen’s tenure was due to lapse in December 2020, when he would have attained the mandatory retirement age of 70 years.

Militant assassins or military excesses, where lies the insecurity in Yola? – The Periscope Global