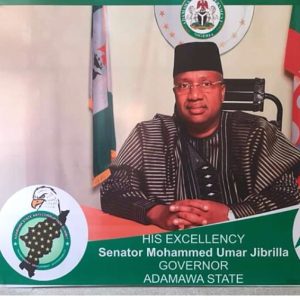 Governor Muhammadu Umaru Jibrilla Bindow of Adamawa state, will give the hand of his daughter Dr. Kuda for marriage tomorrow being Friday, the Periscope Global can investigate.

The wedding fatiha and proceeding ceremonies will be celebrated in Abuja.

Bindow’s daughter the bride, it is said, read medicine from one of the universities in the UK.

Critics question the rationale behind making Abuja the venue of the wedding when Bindow is still the governor of Adamawa state.

“Why should governor Bindow of Adamawa state fix his daughter’s marriage in Abuja?

“Does he perceive that he lost relevance in Yola having lost an election hence, his daughter will not enjoy a befitting marriage celebration to be graced by the who is who’s?

“This arrangement is pregnant of meaning,” Bello Musa an electorate would comment.