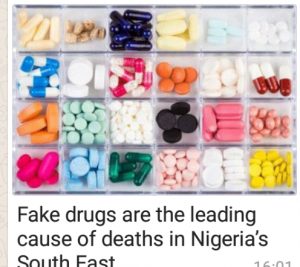 The National Drug Law Enforcement Agency, NDLEA, has warned that the number of deaths as a result of fake drugs was soaring.

Drugs, though essential to human health, are however becoming dangerous to human health owing to the activities of criminals manufacturing and trafficking fake drugs.

“In every 10 drugs you buy, there is a high probability that seven of them are fake,” NDLEA representative said.

Speaking during a sensitisation workshop organised by Christabell International Organisation, CIO, for the Onitsha Branch of the National Association of Patent and Proprietary Medicine Dealers, NAPMED, the representatives of NDLEA and the organiser agreed that something urgent must be done to address the problem.

Deputy State Commander, NDLEA, Anambra State, in charge of Operations and Intelligence, Adewumi Alfred, said the proliferation, consumption, and abuse of illicit drugs are high in Nigeria, adding that recent report revealed that about 70 per cent of all the drugs in the market are fake.

He said: “In every ten drugs you buy, there is a high probability that seven of them are fake. If that is not alarming, I don’t know what can be alarming in Nigeria, there is also a further research work that shows that in the South East, the number of deaths as a result of fake drugs is escalating.”