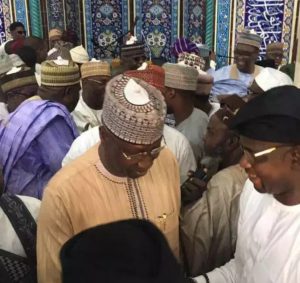 Dr. Udah insisted that she would want a low-keyed wedding Fatiha and proceeding marriage celebrations, even though, she is blessed to have a governor as a father, added to her scholarship as a medical doctor.

Governor Muhammadu Umaru Jibrilla Bindow of Adamawa state, the Periscope Investigate can reveal, would do anything to fulfil his daughter’s well intended wishes.

Dr. Udah might not be popular in Adamawa state to have got friends to remain foes forever with the forces that moved the marriage ceremony away from Yola to Abuja, because she neither spent her childhood, nor academic life in either Mubi or Yola. Her husband of choice might also not have had a root traced to Adamawa state.

The choice of Abuja for a secluded marriage was decided. Although It has generated floodgate of reactions, the intentions associated with Udah’s resolve for a low-key wedding fatiha, made her father to be strong in fulfilling his obligations based on his daughter’s requested interest.

The wedding Fatiha of Dr Udah, eventually went against her wishes, owing to the overwhelming population of witnesses present at wedding, which was contracted Friday, at the An noor Mosque, Wutse II Abuja.

Notables among the witnesses to the wedding fatiha were the SGF Boss Mustapha, Governors of some states, lawmakers, Adamawa state government functionaries and political associates of Governor Bindow.

The Periscope Global, though not invited, will still congratulate governor Bindow and wife, Dr. Udah and her husband with his parents for the marriage contract, wishing the bride and groom a happy and fruitful married life.

Governor Bindow was said to have left Abuja for Kaduna since.