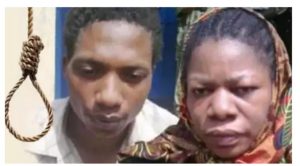 A Benin High Court has sentenced to death a housewife, Eniobong Isonguyo, and her pastor for the murder of her husband, Victor Gabriel Isonguyo, who was a senior staff of Nigerian National Petroleum Corporation (NNPC), in Benin.

Eniobong Isonguyo.
The pastor, Udoka Ukachukwu, heads the church where the couple were worshipping.

The Court presided over by Justice Geraldine Imadegbelo heard that the deceased was killed with a sharp object in his car by the pastor and was subsequently set ablaze in the same car in accord with the wife, who was then pregnant for the pastor.

The Court was told by the prosecution how millions of naira and landed properties belonging to the deceased were taken over by the pastor.

The Court was also told that the murder was conceived and carried out by the accused persons in order to cover up the pregnancy after the deceased questioned how the wife got pregnant while he was away.

The Court also heard how the pastor was told by the woman to wait somewhere along a route her husband normally took to work and stop him for a ride.

The plan reportedly paid off as the man eventually stopped and gave the pastor a ride along Sapele Road, Benin.

During the journey, the pastor had suddenly brought out a sharp object and stabbed the deceased on the neck before setting him and the vehicle ablaze to cover up the crime. 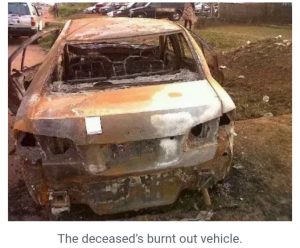 The actual cause of death was later uncovered through an autopsy.

The judge sentenced the two to death by hanging.

The woman who was four months pregnant when the incident happened in 2013, later gave birth in Benin prison