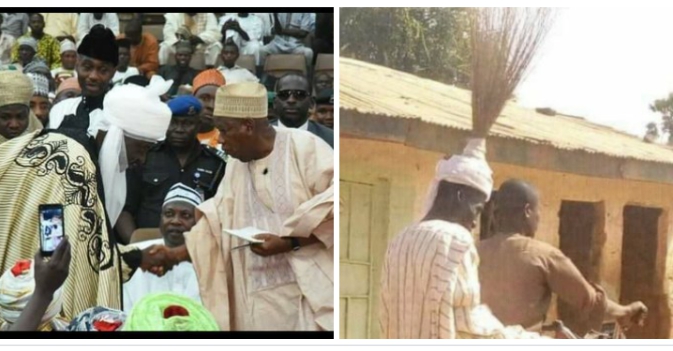 “Is Ganduje-a-za-tion of Kano emirate into five kingdoms apolitical? He said there’s no air about vendetta against not being supported during the 2019 gubernatorial election he alleged manipulations to win. Why should Ganduge reduced the Emir of Kano to be answerable to a local government chairman when it wasn’t so?

“it’s not about His Highness Sanusi II. It’s about demeaning the cultural heritage; reducing Kano emirate to almajiri enclaves. It’s politically demonic a lunacy in Kano.”

Mujtapha a commentator on monarchies, would tell the Periscope Global in Kano, while reacting to the story Saturday that governor Abdullahi the venomous in month Ramadhan Ganduje of Kano state, has appointed four new emirs to include the Kano state assembly speaker, perhaps by way of appeasement, for approving a split Kano bill.

The appointment came 48 hours after the alleged governor vendetta elect Ganduje assented to a bill to split Kano emirate into five.

Ado Bayero is one of the sons of the predecessor of Muhammadu Sanusi, the incumbent emir of Kano.

Meanwhile, Kabiru Alhassan, speaker of the Kano house of assembly, is now a kingmaker in Rano emirate.

Rurum, who holds the traditional title of Turakin Rano, made the list of four kingmakers in the emirate.

Muhammad Garba, commissioner for information, said the new emirs would receive their letters of appointment and staff of office at a ceremony at Sani Abacha Stadium on Saturday.

Sources told TheCable that last night, Ganduje informed the appointed emirs of their elevation and directed them to begin preparations for their new assignment.

A Kano high court had restrained Ganduje from implementing the law breaking up the emirate.

Ganduje’s action is believed to be political. The move was said to be targeted at Sanusi who reportedly worked against his reelection.

Two days before Ganduje gave assent to the bill on the creation of new emirates, a government official had told TheCable that the governor was determined to either remove Sanusi or whittle down his influence.

But speaking with state house correspondents earlier on Friday, Ganduje denied that his action had political undertone.

“We are taking Kano to the next level and we need the active participation of the traditional system, especially in the areas of education, security, agriculture,” he said.

“By decentralising the emirate, we followed history. Years back, the situation was not that.”

He insisted that he had no personal score to settle with Sanusi, whom he said ought to be reporting to a local government chairman.

“So, it is not vendetta, I am not against him (Sanusi). In fact, he is supposed to be reporting to the local government chairman according to the Constitution of the Federal Republic of Nigeria,” he said.

“It is the local government chairman that is supposed to discuss issues with him, not the governor.”

The state anti-graft agency is currently probing the emirate under Sanusi over alleged misappropriation of N6 billion. This could lead to the deposition of the monarch.

Ubale Gwale based in Kano Municipal, insinuated that three heirs to the Kano emirate have vehemently rejected the vendetta Ganduje offer for a spitted Kano.

“The British colonialists could conquer all. However, they were in comfortable concord with the settings of the emirate as they found it. In fact, they utilised it to get at the talakawas for any task or taxation without any confusion or contradiction. They would not split Kano emirate as the once upon a time one who come to Kano as almajiri, has done in violation of court order: With the legislature in his arms, however legitimate, judiciary could be done without.

“Amino is one of the heirs to the late emir Ado Bayero. He contested for the stool. However, Allah SWT decided for the most intellectual and influential Sanusi Lamido Sanusi.

“It isn’t Bichi Aminu is ditching for. It’s the Kano emirate. He could be lured to accept the Ganduje Bichi emirate offer for a promise to later on relocate reclaiming the Kano emirate when His Highness Sanusi II would have been manipulated out of the stool, just like his grandfather the great Sanusi I, anytime soon,” Ubale Gwale would say.