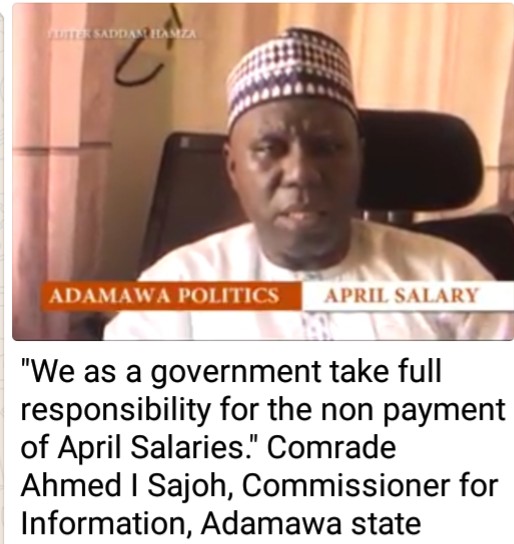 Reacting to Adamawa state commissioner for information Comrade Ahmad Sajoh, speaking on behalf of governor Bindow led government owning up responsibility for the inability to settle workers salary for the month of April even when the month of May is closing up, the former Secretary, Justice Frontiers, Mapida Ikwurunyi an ardent Bindowist Saturday, said his principal or the present government should not at all be blamed.

Ikwurunyi called on commissioner Sajoh to thread with caution over misrepresentation and obnoxious falsification of statement credited to him, absolving the governor elect of any blame in the current April salary saga in the state.

Ikwurunyi said Sajoh should stop blaming Bindow alone for the non payment of April salaries, as every evidence proved that the PDP, in collusion with some bank officials, looking for favour from the governor elect, was responsible for the quagmire the state has found herself today.

Sajoh in a television broadcast that went viral on social media Saturday, said it would amount to being malicious blaming anybody other than Bindow led government for the non payment of April salaries:

“We want to inform the people of Adamawa state, particularly workers, that it’s not done on purpose. It’s not done out of desire to punish anybody for whatever reason.

“Actually, it is as a result of a little misunderstanding with our bankers who have always, over the months, supported us when we have less… when the subversion is less than our requirements and other charges.

“Usually, what we do when our subvention is less than our requirements and other charges, we approach the bank and the bank gives us generous overdraft, which we add up to what the receipt from Abuja and augment it to pay salaries.

“I also want to say very categorically, that as a government, we are not blaming anybody for what is happening.

“We take full responsibility and we are doing everything, as a responsible government, to solve the problem.

“Every other speculation as to whether one person or the other is responsible, as far as we are concern as a government, it is not true. It’s a lie. It’s a mischievous insinuation.

“We believe that there may be some very cogent reason why the bank is delaying in the approval of our request of an overdraft to augment the receipt to pay,” Sajoh said.

Putting a defence to the broadcast, Ikwurunyi said, “the government in which Sajoh serves, knows which opposition members are sponsoring the bankers not to give overdraft to Bindow to offset April salary in Adamawa State. It is high time we should identify and expose them because they are the enemies of the people.

“Ever since Sajoh made his ill-advised statement, giving the entire blame of non payment of April salary to Bindow’s administration, we suspect something fishy and it is high time we put the record straight for the people to understand that the opposition in Adamawa is frustrating April salary in other to score cheap political points and the name of the governor elect to be praised if he come in and pay the April and May salary to workers.

“On this note, we disassociate Gov. Bindow from the so-called blame Sajoh is trying to heap on the state government, knowing fully well that Bindow is not responsible and can never hold workers salary at any point in Adamawa.

“Sajoh should go on fact finding on why April salary is delayed not giving responsibility to a Man that has never defaulted in any salary payment since the inception of his administration,” Ikwurunyi said.

Citizens who were interviewed, told the Periscope Global Saturday, that they didn’t know what and who to believe.

” Why is the commissioner for information disowning a statement of allegations against the governor elect over the non payment of April salaries?

“PP Elisha, Umar Duhu, Mapida, Dasin, name them, made the allegations against the governor elect as one discouraging banks from honouring Bindow’s overdraft request at different fora as were reported in the Finder news and TG news. The Periscope Global equally captured it as it’s mood of the moment.

“Bindow must play the arbiter in deciding the genuine “spokes-medium” for authentic media mediation,” the interviewed citizens suggested.