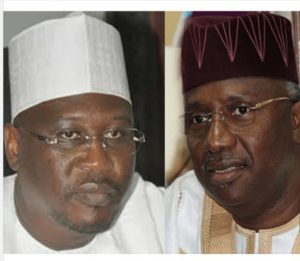 There was a downpour in Yola Adamawa state, after the swearing in of the new governor with his deputy, Wednesday at Ribadu square the venue of the event that registered mammoth witnesses from across the streets, the state and beyond.

The downpour was understood by a man of wisdom, while speaking to the Periscope reporter, as that meant to wash away the previous leadership rot; the metaphoric leadership sins against the state for a new slate with the fresh air.

“That’s why Bindow, shamed by his weaknesses, couldn’t muster the courage to participate in the handing over. He would rather delegate representative.

“Fintiri the new governor would be understood as unreal and unserious lacking the courage, if he had delegated a representative to the swearing in. That’s the paradox.”

The wiseman would say that a new record was started today, either for good or for worse; Whether or not promises would be fulfilled. Whether or not the Fintiri led leadership would restore public confidence in governance.
Education, healthcare, social welfare, youth and women empowerment, restoration of cultural heritage with respect to the monarchy, among others.

A media mediator has observed that previous government disregarded public relations and media relations the twin pillars in the promotion of good governance and debunking rumour for the services of social media touts.

“Previous government has, for the most part, deployed the services of social media touts, who only lambasted and castigated elder statesmen who would caution the governor that he was going gaga with some actions They were analysed to be the negative instruments that unconsciously played principal role in pulling down their principal.

“Governor Fintiri, though, I know is aware, he should still be advised to take caution,” the media mediator would advice

They both use lenses. However, critical scrutiny can expose the difference.