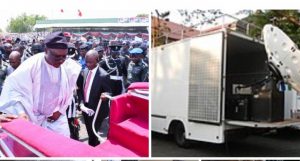 Everything was set for the swearing in of newly elected president with his vice and governors with their deputies across the country, slated for May 29 as was arranged.

Umaru Ahmadu Fintiri is the newly sworn in governor of Adamawa state. Wednesday, May 29 has indeed attracted attention supporters, electorates and the invited guests to Mahmud Ribadu Square, the venue of the swearing in.

The elderly people and those who were not accustomed to crowds would prefer being entertained by viewing the live broadcast of the event on television. However, to the group’s dismay, there was indeed no live broadcast on any of the television stations in the state.

The disappointing scenario, coupled with campaign of calumny, gave recourse to the rumour that governor Fintiri was either stingy to be pretending the financial capacity constraint or lacked the support of family, friends, favourites and allies who could volunteer to sponsor the TV live coverage of the swearing in because, as was insinuated, “Fintiri is unpredictable for any risk investing to colour his celebration.”

Some among the group with the insinuation tried to justify their claim to our reporter that the newsmen who covered the events at the level of corresponds, were said to be only treated miserably with N5, 000 as PR.

However, the Periscope on the scene reporter will reveal the contrary to the insinuations, There was actually the arrangement for the TV live coverage for which Gotel communications was engaged.

“The Adamawa television corporation ATV Yola is constrained of the capacity for the live coverage of events owing to the lack of political will on the side of the previous state government to adequately fund its own media station. ATV Yola doesn’t have utility not to talk of OB Van.

“It’ll take fortune to bring OB Van to Yola from either Borno the northeast zonal headquarters, or Jos or Benue for NTA to broadcast live the swearing in ceremony.

“There’s a technical problem with the TV Gotel’s OB Van. It’s not been fixed, contrary to what’s expected, before the swearing in ceremony.

“For running the live coverage of the events on Radio Gotel, you can be sure that but for the technical problem, TV Gotel could made the live broadcast of the swearing in ceremony,” a staff with the Gotel communications who would rather prefer the anonymity, unofficially, revealed to our reporter.