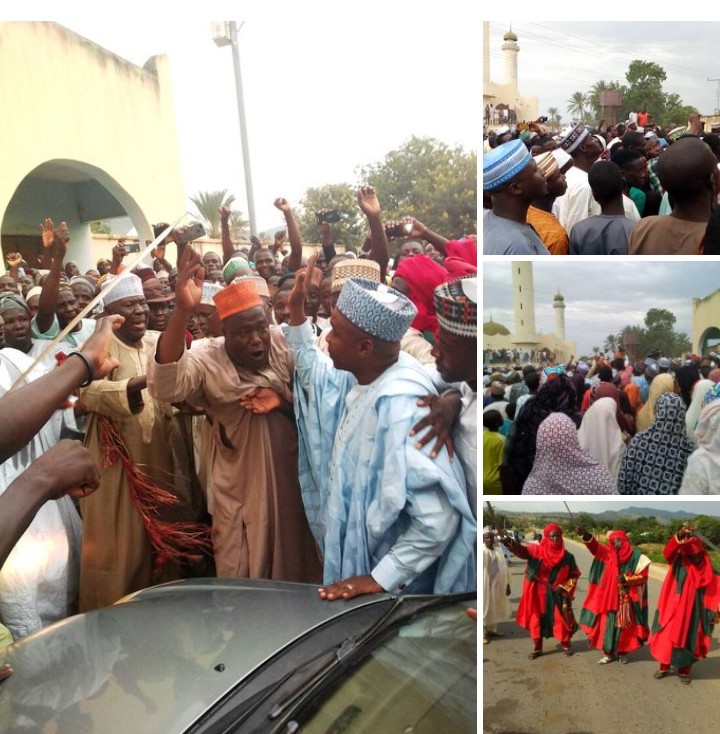 With a Professor of Constitutional Law as Chief of Staff, Fintiri mustn’t act against court order – literary critic

Over 17, 000 followers sought to have a kind of situation report from the Periscope online, regarding the Monarchy in Maiha; kind of sorting out fact from fiction, reality from rumour – Marrie Ann

It is only taken as a mere rumour that governor Ahmadu Umaru Fintiri of Adamawa state has given his earlier directive to honour court order a second U-turn thought.

The rumour generated and spread like wildfire in Maiha local government area and beyond could not be unconnected with the seeming silence and delay in, occasioned by the unfathomable reason for the red tapism, the approval of Barr. Mahmud Abubakar Suleiman as the legitimate District Head of Jalingo-Maiha for which the teeming subjects are anxiously waiting for a betting celebration.

Governor Umaru Ahmadu Fintiri has, on Tuesday June 18, 2019, having been briefed at the State Executive Council meeting, directed that since the Yola High Court has, in a declarative judgement, without any air about stay of execution pending appeal judgement, ordered for the governor’s approval of Barr. Mahmud Abubakar Suleiman as the legitimate District Head and restrained Usman Wakili Shehu called Idi the Bindow against the Emirate Council appointed, from further parading himself as anything district head, the court order must be honoured.

Fintiri could have impliedly conjured up injustice and display of undue arrogance on the part of Bindow the former governor and Idi the Bindow’s illegitimately approved District Head; the duo having joined in disrespecting the court order.

The SEC meeting was said to have commended governor Fintiri for taking the bold step to end the seeming executive contempt of court.

Fintiri, not only in the celebrating Maiha LGA but in Adamawa state and beyond, was hailed for the fair and apolitical step taken to end the executive complecency to the conspiracy against the Monarchy in Maiha, in honour of the rule of law

Now there have been rumours going round in Maiha discrediting Fintiri’s position:

That some political bigwigs have interceded against justice before the governor against the law, to warrant Idi the impostor claiming the throne, because Idi the niece of a village head not Mahmud the heir to the late District Head of Jalingo-Maiha was loved by “the people in Maiha”.

Thankfully, the rumour did not arrogate to itself, the perception of the “people of Maiha” for suggesting “the people in Maiha”

That against declarative judgement, which required no stay of execution pending appeal judgement, Fintiri, having been advised by his Chief of Staff Prof. Maxwell Gidado the constitutional lawyer, doing the bidding of the conspirators against court order, would instead direct the Mubi Emirate Council to appoint an interim district head of Jalingo-Maiha pending appeal judgement, speculated to end in September, 2019.

“These points generated by rumours you’ve articulated, it is hoped, remain as rumours. There’s however a bureaucratic opening to it. Governor Fintiri was commended for ending the injustice with impunity by directing for the approval of Barr Mahmud Abubakar Suleiman as the legitimate District Head of Jalingo-Maiha. That was on Tuesday 18 of last month. It would be expected that by now the district has had her legitimate headship coronated.

“The people of Maiha want to know the fate of the stool. The apolitical elites are however insisting on due process against being in romance with the contempt of court,” Bubaji, a citizen contributed.

The youths group in Maiha following the rumour, were contemplating whether or not governor Fintiri would rescind his earlier directive, honouring court order to approving the legitimate heir to the throne. The group were however being responded to by Yunusa Abubakar the literary critic, on the supremacy of the rule of law.

“With a Professor of Constitutional Law as his Chief of Staff, Fintiri mustn’t rescind his earlier directive, it will amount to acting against court order,” the literary critic argued.