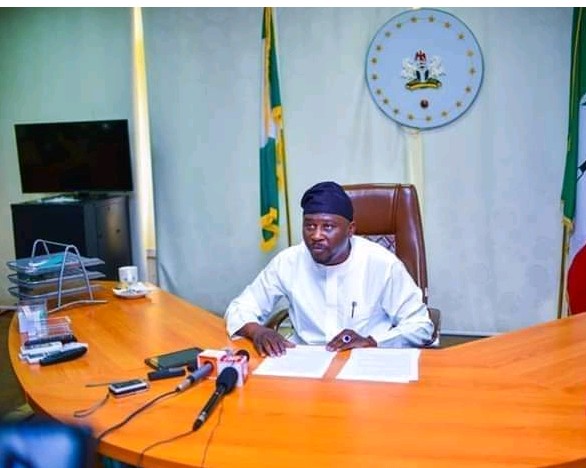 Governor Ahmadu Umaru Fintiri of Adamawa state upheld the philosophy of upgrading by restructuring the civil service in the state. Part of which he declared that henceforth, workers would be enjoying their salaries from 24th to 25th of every month, whether or not there was allocation from the Federation Account.

Fintiri disclosed this Thursday, at the banquet hall of the government house in Yola, while receiving the SDP members who who could not make good remaining in opposition party, defected to the ruling PDP in the state.

While commending Fintiri for fixing the payday and his move to ensure salary parity for all workers, civil servants in the state, the Periscope interviewed, have however lamented that instead of actualising the implementation of the new minimum wage, they have had salary cuts that crippled their budgets for the month.

Workers’ with the state government revealed to the Periscope fact check Monday that they have not been enjoying the yearly step increment salary since 2017 and promotions arrears since 2015.

“We’ve not been enjoying the annual step increment salary. Those of us who have been promoted have not been paid their promotion arrears. Governor Fintiri must do something about that to maintain his “ATM Fintiri” name tag,” a staff with a state media organisation said.

A permanent secretary with Adamawa government argued that Fintiri’s civil service restructuring was already suffocating. He explained that the monthly subvention meant for the ministries would have to be retired by a permanent secretary before the scrutinising governor before being allowed access to the next monthly allocation.

“Some people could see this as prudence. It is certainly suffocating. It discourages service delivery by breeding sabotage,” the Perm Sec would say.