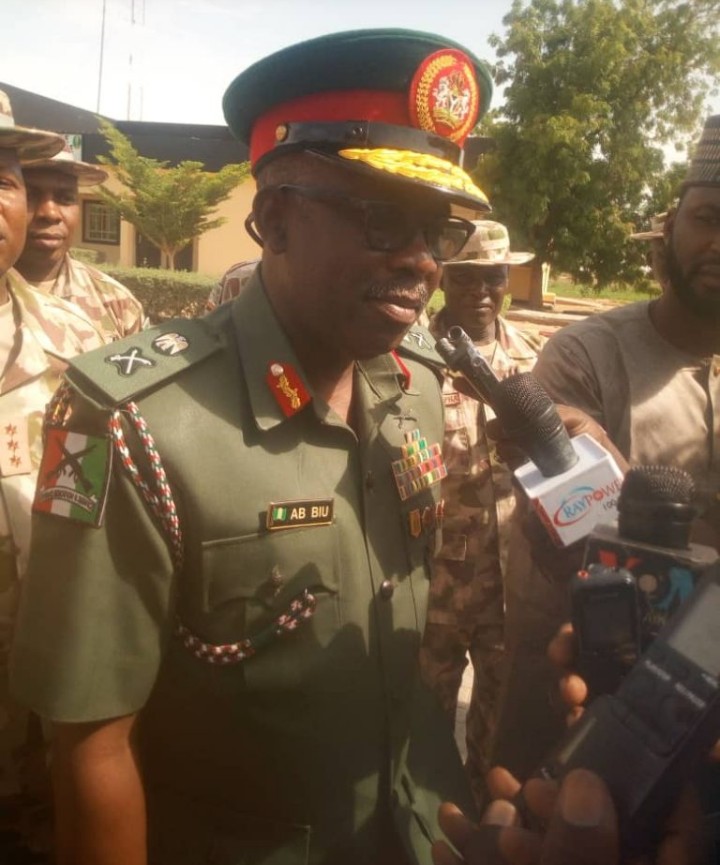 The newly decorated General Officer Commander (GOC), Major General, Abdulmalik Bulama Biu has called on the Boko Haram insurgents to celebrate his elevation by laying down their arms and embrace peace or face imminent extinction.

Biu who made the call in an interview with newsmen at the Division headquarters, Maimalari cantontonment after taking office as substantive GOC 7 Division Wednesday, dedicated his elevation to the men and officers of the division and those who encouraged security for peaceful coexistence.

“I call on the members of the Boko Haram insurgents to celebrate my elevations to the rank of Major General by laying their arms as quickly as possible or face imminent extinction, as we will continue to go after them, more than we have been doing before.

”This elevation is not for me alone, it is for the men and officers of the division, all stakeholders and Nierisns in general. The elevation will Spur us to do more, as our efforts are being recognized.

“One of the achievements is that the society has understand that this war is not for the Nigerian’ military alone but for all Nigerian’s,” Biu stated.

Biu further said that “both the Boko Haram insurgents and their collaborators should have a rethink and join hands with other Nigerians to move the nation forward. If they refused to comply, we will not hesitate to force them to give peace a chance.

”Our desire and commitment is to quickly finish our business of fighting Boko Haram and other crimes, so that we will go back to our barracks, ” Biu added.

While thanking President Muhammad Buhari and the Chief of Army Staff, Lt General Tukur Buratai for finding him worthy of the elevation, Biu promised to put more efforts and commitment to end the insurgency and urged all Nigerians to support the military in the fight.

The occasion witnessed a guard of honour, inspection of parade and charge of flag among others.