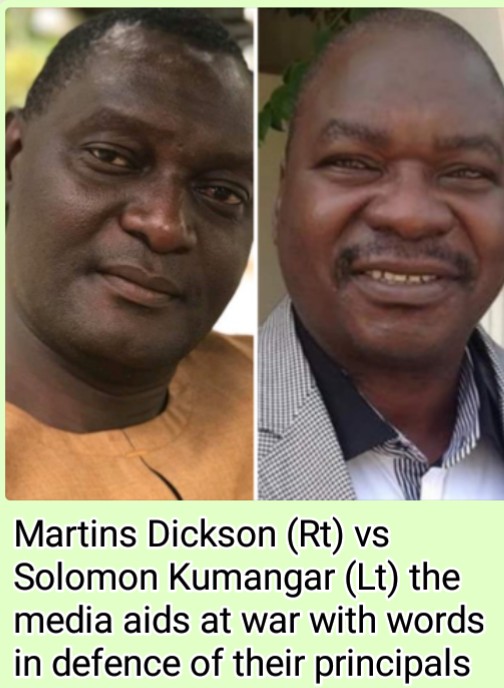 “This life is not about arrogance, insults or unwarranted attack on people. Look at the Board in your office, every name there represents a tenure. What that means is that whatever has a beginning has an end. Just be careful how you use your new found powers…” Comrade Ahmed Sajoh.

The honest and interesting debate is that which is not marred with hyperbol. I begin with this.

I have had patients who were being managed at FMC Yola added to my work schedule. There was a media debrief on the journey to Ganye Chiefdom for Gangwari’s hospitality in the Royal reception and generosity, which he extended to the indigent patients through the Hospital Paupers Fund floated by the management of FMC Yola. Konngol SilverTongue: Media and Language Training Institute, Yola would be graduating another set of professional public speakers, media mediators and event managers, as a contributing facilitator, graduands must organise and by themselves manage their send-off ceremony under my and other facilitators’ critical watch. Integrating the Fulani herdsmen educationally by getting them out of the savage life, the monarchy in Maiha and other investigative and human angle stories must also not be underreported.

The list is entirely endless to accommodate any air about itinerary to also have made me give any reservation to what would count for July 21st, considered as a day to have celebrated my birthday without having been remembered by family and friends not without foes though, financial, academic and media institutions, professional colleagues and students.

“HBD… HBday dear, brother, friend, sir… were the Sunday thorough greetings throughout. I was not Hakeem and have no intention for another wife from America and I have been by myself using the bathroom. Therefore, Eddie Murphy’s COMING TO AMERICA should remain as it is, a fiction without any friction.

What remained facts crucifying the fiction, were the birthday wishes I have since lost count but have collectively in their individuality responded with “ameen” and “thanks”

“Hon Adamu Dodo, in Yola. MAIN NGR (Media Against Impunity in Nigeria) is wishing you a very happy birthday. Thank you for all you are doing. It’s all for God and Country; congratulations﻿,” Meshark Sharks Idehen the group admin wrote, similar message was sent via NOW NIGERIA GLOBAL FORUM.

Fellow Sukana Danjuma Tusha Secretary and Registrar with the Institute of Business Diplomacy and Financial Management also wrote on behalf of the Chairman and the governing council, wishing me a happy birthday as a member Governing Council of the Institute.

The Institute of Peace and Conflict Resolution of the United Nations-POLAC equally congratulated my birthday, wishing me more lively and lovely years ahead.

The Literati group however challenged my birthday to broker peace by resolving conflict between the media aids who were at each other’s throat in defence of their separate principals.

“Dr Dodo, get your colleagues in the pen pushing profession away from public embarrassment in the name of defending their principals. They are waging a war with words using the media, as I wish you a merry birthday,” Marrie Ann Jafferson would throw the challenge.

“It isn’t a public embarrassment Marrie Ann, not a slitting of throat either. It’s an open debate, defending dignity with integrity, challenging lies and inefficiency, deafening defective memory, demeaning amnesia and/or technically defining “dementia”, however idiotic,” McCarthy would contribute.

“Dr. Dodo has been part of the project. In fact, he initiated it by deconstructing a governor’s scripted speech,” Abdullahi Badaru would argue

Marrie Ann Jafferson was literally trying to make my birthday celebrated with a tough critical thinking; the media aids at war with words, defending their principals! How should I come in?

Neither Martins Dickson the SSA on media to former governor Bindow, nor Solomon Kumangar the Director Media and Communication to the present governor Fintiri have I been in speaking terms.

I’ve called Kumangar before going to the press sometimes but he could not pick my phone call. I had to get him communicated through other sources, other people to be able to shield his principal from a reckless grammatical error attacks.

So, how and where would I start the Marrie Ann Jefferson’s peace resolution without it being translated to Michael Jackson’s thriller?

Deconstructing the debate would be destructive to peaceful resolution.

I argued in one of my articles that it would be too early dissecting the performance of Solomon Kumangar the lead media aid to governor Fintiri. Some critics have however countered my consideration, arguing that “there is no better time of critiquing that now, owing to the unpardonable, somewhat reckless utterances in seeming cosmetic defence of his principal, have resulted in not only “deprofessionalising” him but also castigating his principal.

Within just about fifty days in office, Kumangar’s more than the performances of other media aids, in fact even put together, has received overwhelming bashings, lashings, slamming, hitting, punches and/or attacks by the new media.

An elder in the pen pushing profession, in a telephone conversation critically analysed that Kumangar simply shut himself on the foot.

Martins Dickson has thrown similar challenge while defending his principal whom he argued had something worthy of commemoration rather than commiserating one hundred days of jaundiced performance.

Martins spelt out the number of roads Bindow built and the number of hospitals Bindow renovated among other achievements within one hundred days.

Martins mentioned general hospital Maiha among the Bindow renovated and fully equipped health facility. This is rather hyperbolic to a boiling point of disbelief; a kind of obsession with obnoxious falsification or abnegation of facts, the kind, which he challenged his argufier to desist from being drown in.

Maiha has got only a cottage not a general hospital. There was the renovation but no equipped.

Bindow’s legacies in Maiha were, retrogression, trying to distort history, disorder an established order and reduce its monarchy into anarchy.

Fintiri inherits the machination against justice from Bindow. And in doing the right thing by having the right thing done, the people of Maiha, having celebrated Fintiri’s attempt at instilling justice by restraining an impostor from parading himself as the district head following the court order, are anxiously waiting for the governor’s approval, following the court order, of the appointment of Barr. Mahmud Abubakar Suleiman the legitimate heir as the district head of Jalingo-Maiha.

Could Kumangar be said to have developed a defective memory? Was he the initiator of the misleading accusations that led to his catastrophic catapulting and castigation? Could he have deployed the services of the uncreative, illinformed mercenaries to held do his job? Or ore the unwarranted utterances simply doctored? Answers to these questions take another story.

Meanwhile, whilst it were the people who reminded me of my birthday, wishing me lively and lovely years ahead, it should be the people who could judge whether or not I have been able to make any impact the previous year(s) to have merited celebrating. Meanwhile, thanks for the wishes, Peace!