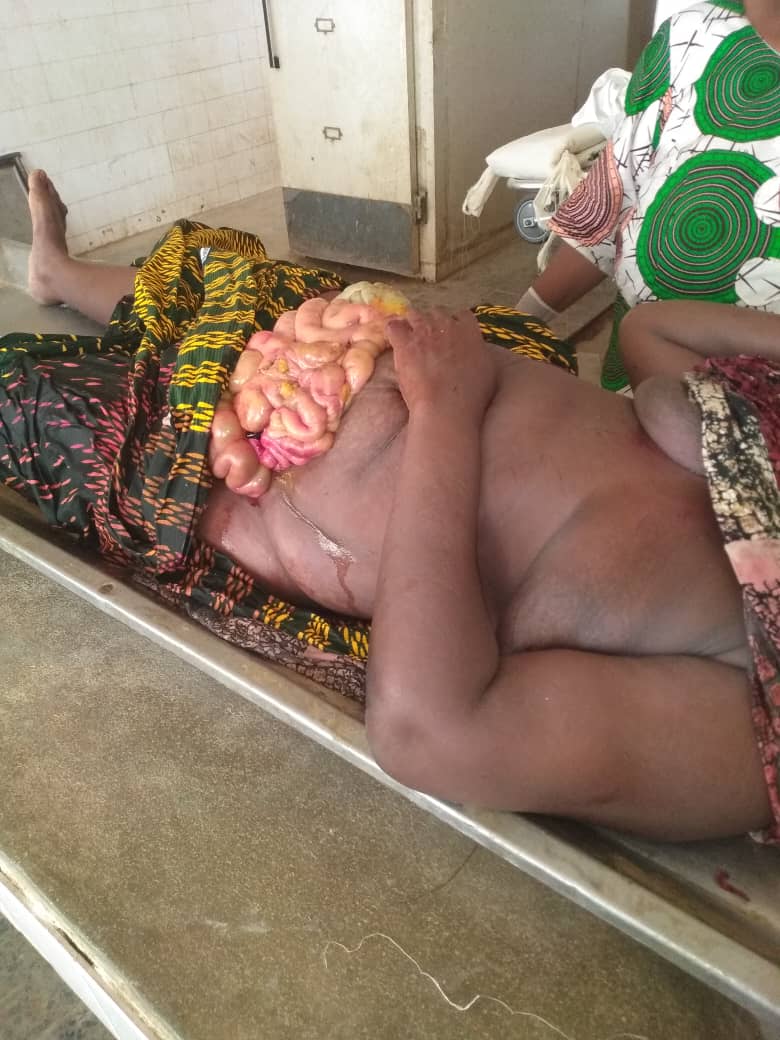 A polygamous husband Aliyu Hussaini has allegedly murdered Aisha his wife the mother of six for rituals, the Periscope investigation would reveal.

The gory incident was said to have occurred on the silent Tuesday at about 1am in Arahan Kunu ward, Mubi north local government area of Adamawa state, northeast Nigeria.

Having earlier reported himself, the wife murderer is currently under police custody in Mubi, a police officer who craved anonymity revealed that the incident was communicated to the police command headquarters in Yola. Efforts to reach the Police Public Relations Officer to confirm the arrest failed as at the time of the press.

There were two versions of the tragic incident. However, both versions are agreed that there was cordiality in the house, no wives open rivalry, no conflict, no violence, no crisis, no public scorn misunderstanding, no shouting above and against each other’s voice…

Speaking to the Periscope crime scene reporter, Jauro Isiyaku Jibrilla Madinah Dagala the ward head, revealed that Aliyu Hussainu told his friend that he would fled out of town for good to escape the wrath of killing his wife whom he has stabbed repeatedly, thinking that he was exorcising the devil, which appeared in his wakeful dream, daring to destroy him.

“After having observed subhi prayer, Hussaini told one of his friends that there was N1.8m kept in the room his wife’s lifeless body lay, he should go and bring it.

“Having taken into consideration that some neighbours must have noticed him not only interacting with but also entered Hussain’s house, enough to make him a prime suspect, the friend decided to delay Hussaini’s exit by advising him to report a framed incident to the police,” Jauro said.

Hussaini was said to have told the security at the police station he reported that some armed robbers who were after the cash he withdrew, trailed him to trace his house and descended on them in the middle of the night; that his stubborn refusal to part with the money led to the death of his wife.

Unknown to Hussaini’, his friend could have secretly revealed the real version to the police, which could have resulted to the detention of the murderer at the police station.

Jauro has found it difficult to link the incident to cultism or ritual activity, though he could only see the murdered from a distance to have noticed any missing part of the deceased body.

“Some say that Hussaini is a psychiatric case. There’s however, nothing to suggest his mental defect, being my close neighbour,” Jauro argued.

Rukaiya is one of the sisters of the Murdered Aisha, who has a different version of the incident. Late Aisha was called by some people in the ward as Uwargida. Her parents and sisters however called her Sabuwa.

“Sabuwa used to wake her children for morning prayers. However, the children were only to be woken up by their stepmother later after the Subhi prayer on Tuesday.

“The fifteen years old asked the whereabouts of his mother. The stepmother could not provide the answer. Hussaini However told them that there was death in his father In-law’s house, Aisha left early for mourning.

“The second wife challenged the story as to why she weren’t informed. She said she would also be going there to commiserate with the deceased family. Hussaini warned that she mustn’t go anywhere,” Rukaiya said.

Trouble started for Hussaini when his family recalled, not long ago, he warned them that whatever could be happening anywhere at night, whatever the screaming, the cries suggestive of seeking for help, they must not leave their rooms.

The members of the family were said to have had Aisha’s agonising cries. However, having been conditioned to submitting to the orders of their landlord, they were not to come out for any rescue.

“One of the Sabuwa’s children, having suspected something sinister and uncanny about his father’s exhibited character, decided to go and look through his mother’s window.

“There was something like lifeless body covered with blanket lying on the bed. My niece used the stick of a rake to uncover whatever could be lying there.

“Terrified by what he saw, my niece run to his stepmother and told her that his mother was murdered. He also run to his maternal grandparents and information them that his father has killed his mother.

“The police has evacuated the dead body before Aisha’s parents could get to the house. We only met the corpse at the mortuary.

“Those who prepared the corpse for burial couldn’t get to see some parts of the lifeless body.

“Hussaini should be asked what happened with the missing parts of Aisha’s body,” Rukaiya insisted.

The people of Arahan Kunu ward argued that Pap could be cheap there. However, life was so valuable and so expensive to waste.

“This is unpardonable, certainly unforgivable. Hussaini could either has been killing, committing unexposed murder and/or he could keep on doing it if the law doesn’t take its course.

“An eye for an eye; a life for a life; that’s the spirit, living in a sane environment”, the citizens cried out.