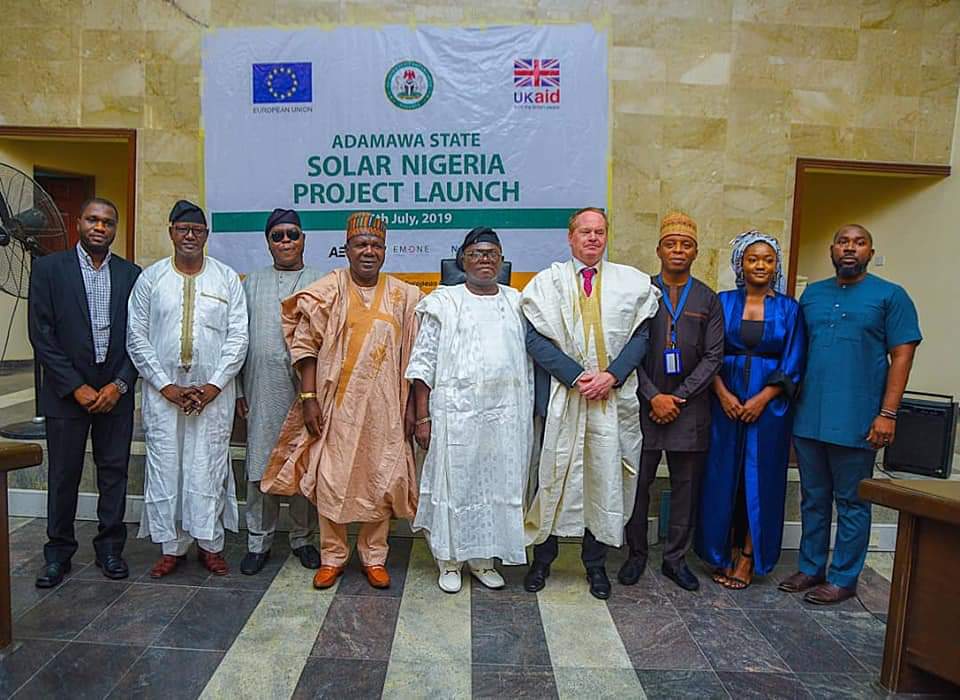 At a ceremony held in the Conference Hall of the Government House, Yola, Governor Fintiri expressed delight over the EU’s intervention.

Represented by the Chief of Staff Government House, Yola Professor Maxwell Gidado SAN, Governor Fintiri said the project would bring relief to people especially, in the insurgency ravaged communities of the state.

Fintiri solicited for the EU to also extend its support to some areas in the Southern part of the state that suffered from the menace of farmers herders clashes recently.

Fintiri commended the EU for its of magnanimity to the people of Adamawa, assuring them of the state government’s support and cooperation at all times.

Earlier in his welcome remark, the permanent secretary in the state ministry of Energy Mr Mennas Jacob Ngangurah thanked the EU for launching the project, which he said would provide solar power in the healthcare sector.

Contributing, the Permanent Secretary state Ministry of Health Mr. Kennedy Bathmawus applauded EU for their noble intervention programme, which according to him, would facilitate healthcare delivery in the state.

The Head of Cooperation of the European Union Mr. Kurt Cornels revealed that a study conducted in 2013 showed that only 34% of hospitals have reliable electricity access in Sub-Saharan Africa.

Mr. Cornell added the EU would invest 10m Euros out of the overall project budget to provide sustainable energy supply in eight health facilities across the state using solar PV.

Cornell said the benefitting communities of the project would include Michika, Mubi, Maiha, Gulak, Garkida and Gaanda.

Highlight of the event was the presentation of Gulam, a hand weaving local fabric to the EU Head of Cooperation.