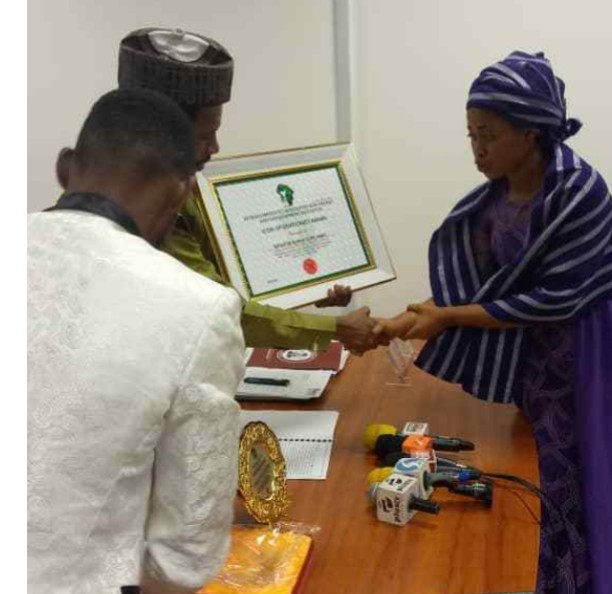 The Periscope in Diaspora reporter

The Inter-community Awareness for Change and Development Initiative took the Icon of Democracy award to Sen. Abbo’s office in Abuja, where he was met with Sen. Binos Yaroe the Senator representing Adamawa Southern Senatorial zone.

The Director of the group Dr. Lami Uguogho, revealed that they have been monitoring the young senator closely since before inauguration and have decided to honour him for his effort in contributing to the development of not only his constituency but the nation at large.

Uguogho stated that the “Intercommunity Awareness for Change and Development Initiative is an organization that recognizes individuals who stand out in the governance of the country.”

Uguogho said, the award was in recognition of the Sen Cliff’s effort in nation-building and contribution on relevant matters that has to do with the masses.

Uguogho described Sen Cliff as a young astute democrat who even in the face of trial and persecution was focused on dividends of democracy.

Sen. Binos Yaroe who described Sen. Cliff as someone who represented the truth and a pacesetter, applauded the group for finding his colleague worthy of the award

Sen Cliff appreciated the group for finding him worthy of such a prestigious “ICON of Democracy” Award, assuring that his pending case of assault would not deter him from providing dividends of democracy to his constituents and Nigerians in general.

Miffed by the presentation of Icon of Democracy Award by a Nigeria in Diaspora group, under the aegis of Sanity and Integrity Forum, led by Thelma philimon, revealed to the Periscope in Diaspora reporter that they would be in Nigeria from UK to honour Sen Cliff with the Icon of Women Assault Award, arguing that it was the Senator’s onerous achievement recognised even internationally, in the period under review.

“We shouldn’t be sycophantic, betraying the trust entered with integrity; What dividends of democracy has the northern senatorial zone of Adamawa state and Nigeria as a whole benefitted from Sen Cliff?

“Cliff is yet to propose any mortion at the chamber, he hasn’t at the moment, contributed on the developmental issues regarding his constituency or his state not to talk of the country as a whole, other than frequenting sex toy shop and assaulting a breastfeeding mother.

“But for the killing of his uncle, which we mourned and the kidnapping of his breastfeeding aunty, which we equally condemned, Cliff hadn’t been involving himself in conversation bothering on security in the country.

“Cliff’s colleague, Sen Aisha Dahiru Ahmed known as Binani, the lone lady from the north at the the Senate representing Adamawa central zone, ought to have been the achiever to be awarded Icon of democracy.

“Binani took a topical issue about her state, the northeast and the country as a whole; she advocated for the upgrading of Federal Medical Centre Yola, Adamawa state, northeast Nigeria to a teaching hospital and establishment of medical college at the Modibbo Adama University of Technology, Yola,” Philimon argued.

Philimon said that Binani has done and is doing as a true democrat, what counts for as dividends of democracy even before being elected, “To Binani goes the Icon of Democracy Award from us,” Philimon said.

“We’re now preparing to come to Nigeria our country and head for the office of Sen Abbo the women assaulting Cliff to present to him the Icon of Women Assault Award, for his laudable achievement, anytime soon,” Philimon said.